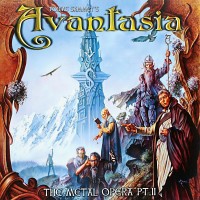 
And here's the second part of the opera. This one is a lot better in my opinion. Most notably it has much more variation. And a really, really, really really seriously awesome and amazing opening track. The Seven Angels is an epic masterpiece spanning fourteen minutes and featuring seven of the eleven vocalists. Plus two choirs and some solos. Great song, nothing more to say about it.

Lyrically this album continues where the first left off. After stopping the evil pope-man in the first episode, our hero saves all the dwarves and elves and happy people in Avantasia. When that is done he visits the tree of knowledge who tells him the kind of stuff that such trees know. With his newfound illumination, thanks to the plant, Gabriel (Tobias Sammet) goes back to Rome and saves some souls. Unfortunately his dwarvish friend dies though. His druid friend then saves his stepsister but unfortunately dies too. But the stepbrother and stepsister are finally together again; Thus, again the lyrics are rubbish.

Musically this album is a lot more advanced predecessor though. It has a more mature touch and a lot more variation. It's less symphonic then the first one but has a lot more non-power metal elements. The fact that it's not 'pure' power metal alone already makes this album much different then the first. The drumming isn't always fast anymore (but in my opinion a tad worse) and the solos are more complicated. The vocals are still done mainly by Tobias Sammet but with help from many others and again Sharon Den Adel's wonderful voice, unfortunately, enriches this album on only one song, the last one.

Something else that always jumps to my attention is that the beginning riff (and the scream at the beginning) are EXACTLY the same as the beginning of "Schrei Nach Liebe" by the German punk band Die Ärzte. It's an obvious ripp-off, but it does give more variation to the album as a whole.

I think Tobias took more of a risk with this one. The first one was purely power metal with some symphonic elements, but this album is more. Probably A LOT of people who like power metal very much will disagree with me here, but I think The Metal Opera part II is much better then part I. Although I think Edguy is very bad, this album did prove to me that Tobias is an extremely gifted songwriter and a very good singer.