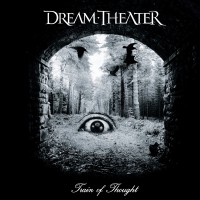 
In my opinion, 2003 seems to have brought many albums with awful titles and covers. This release is just one of those. The gray eye at the end of tunnel might have been the ideal subject for Evergrey, but not for Dream Theater. The sticker on the cover quotes "The new progressive metal masterpiece", but it's hard to call it a masterpiece. But let's push play.

Once again, the album starts just when the previous stopped. But after a few seconds, the delicate reminiscences of "Six Degrees Of Inner Turbulence" suddenly break: a gloomy bass intro brings us into this new heavy chapter. Since the first track, it's easy to understand that the band has chosen the heavy way. The whole album sounds like "The Glass Prison".

John Petrucci plays 7-string guitars on almost every track; Mike Portnoy seems to play drum solos instead of keeping the rhythm; Jordan Rudess plays only keyboard solos (yeah, always with the same sound effects) and almost every trail of rhythm piano or atmospheric strings seems now buried in the past.

The opening track, "As I Am", has a catchy riff and it will probably be the only single of this album. The second track is the follow-up to "The Glass Prison": it shares some lyrics and a riff with its predecessor. And there's an obvious vocal reminiscence of Metallica's "Blackened". The third song, "Endless Sacrifice", reminds me of Voices. It is one of the best songs of the album: it features a good alternation of beautiful clean sounds and powerful distortions, dressed with amazing light-speed solos.

"Honor Thy Father" has shocked me because of the nu-metal influences, really absurd. It's the only song I don't like. The fifth track brings us back to the golden age. It's something like "Through My Words" or "Wait For Sleep": only vocals, clean bass, bright warm piano and a beautiful cello, which fits in very well. It's the most emotional song on the album. Unfortunately it lasts less then 3 minutes. The instrumental "Stream Of Consciousness" is a bit disappointing: too long, filled with too much improvisation, lacks expression. It reminds of "The Dance Of Eternity", probably because I didn's like that song.

The last song is, in my opinion, the true masterpiece: a clean guitar leads you into 14 minutes of glorious composition and classic Dream Theater melodies revisited in a more modern key. The lyrics deal with Bin Laden and Islamic fanatics.

"Train Of Thought" is the heaviest album Dream Theater has ever recorded. Heavy, unusual, excessive, pretentious. The songwriting is not exacting as in the past. Once again, too much improvisation and absurd lengths: 7 tracks clock in at about 70 minutes! I love long tracks, but only if they are various, exacting and exciting (I mean "A Change Of Seasons", "Learning To Live", "Scarred", "Trial Of Tears"?). Heavy riffs and cold fast lead parts have buried almost all the expression and the emotional warmth of "Scenes From A Memory" and "Images And Words". Just a glimmer shines through "Vacant": a meager consolation. Forget all the emotional solos of "Lines In The Sand", "About To Crash", "Learning To Live"?

I don't consider this album as a flop, but I want to warn you: if you didn't like "Six Degrees Of Inner Turbulence", don't even think to buy "Train Of Thought".
Written by The Silent Man | 13.11.2003