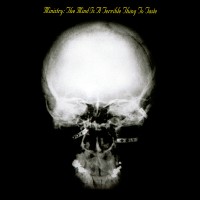 
Here we go. This is the BEST industrial album ever recorded. A milestone. A beacon that attracted hundreds of other industrial bands to it's bright light. Bands like Nine Inch Nails, KMFDM, Fear Factory, Gravity Kills, Static-X and hundreds more all claim to owe part of their sound to "The Mind Is A Terrible Thing To Taste". It is truly incredible what Al Jourgensen, Paul Barker and their many friends have done here.

The album kicks off with the jackhammer riff and angry vocals of "Thieves" (ever wondered where the claim that industrial sounds like a jackhammer came from?). "Thieves" is one of the heaviest songs on this album and a wonderful way to start. Who wouldn't start headbanging to the song's trademark fast part (resembling the sound of Fear Factory five years later)? I know I did. This wonderful opener is followed by the most influencial industrial song of all time: "Burning Inside". We will hear similar drums and guitar arrangements again on many latter albums, including Nine Inch Nails' "Broken" and even White Zombie's "Astro Creep 2000". This song also features the most incredible sounding vocal I have ever heard. Al Jourgensen sounds like a half-demon, half-madman on speed. What is also very important is that "Burning Inside" is a very successful mixture of trance and heavy riffs - a mixture few artists were able to create successfully ever since. The next song on the album, "Never Believe" is another such mixture. This time around; however, a gothic atmosphere is added to it, which, together with the fabulous lyrics of this track, create a truly demonic impression. Chris Connelly, the vocalist who performs on this song, has one of the most original ways of singing - he sounds very schitzophrenic - and he sings in this way all throughout "Never Believe". He delivers an even better performance on the next track: "Cannibal Song", where he sings only to the accompaniament of a bass guitar and a dense layer of sampled sounds. The next song, "Breathe" is another headbangable track, with only the words "Breathe F**ker" repeated over and over again. Then, the collosal "So What" comes. That track is a real classic. Almost techno-sounding parts change seemlessly into energetic and heavy riffs. The refrain of "So What" has an anthemic quality to it as well and proves to be a superb concert track. After "So What", experiments begin on the album, starting with the rap-industrial-metal "Test", going through the Primus-like bass assault of "Faith Collapsing" and ending with the old-school industrial (no guitars) "Dream Song".

It is really dificult to describe an album that one praises. For this reason, it is also very difficult for me to describe "The Mind Is A Terrible Thing To Taste". It is also impossible to describe with words something that must be heard. I know one thing: it changed my whole view on what music was all about and basically my whole life. Try it, maybe it will change yours too?

Written on 03.10.2003 by
jupitreas
With Metal Storm since 2002, jupitreas has been subjecting the masses to his reviews for quite a while now. He lives in Warsaw, Poland, where he does his best to avoid prosecution for being so cool.
More reviews by jupitreas ››