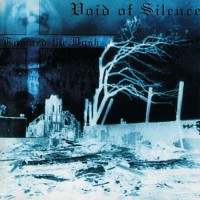 
More by accident than on purpose I recently discovered Toward The Dusk from our Italian doomsters Void Of Silence. This band hailing from the depths of Rome unleashed this piece of work in 2001, two years after they had formed.

They play a heavy, bombastic type of doom which seems to be characteristic of the Italian Doom scene. Their instrumentation is what you might expect from a band in this category: slow heavy guitar riffing with slow drums accompanied by a symphonic set of keyboards. The bass is also nothing extraordinary; it gives the music a heavy accent which is what it needs to do in this genre. The music is not very unique but they execute it all pretty well, so if you are into this style of music you will like it. What draws the most attention to this band is the way their vocalist performs. Malfeitor Fabban, who left the band in 2002, has two ways of singing. First of all there is the somewhat blackish vocal style he uses to screech his way through the album. Then there is his clean way of singing which most people will probably not enjoy with their first listen. His voice is very hard to describe but I think the best way to try would be like this: a very devout monk who unfortunately got a kick in the nuts by the atheist living next door. In other words, his vocals sound very distressed, one could say "pinched off." This wailing sort of vocals may take a while to get used it, as it took me a while as well, but now they work pretty well. If you can't get used to them I'm afraid this is not the band for you since his clean vocal style is the most dominant of all in their music.

All in all, this album is a good chunk of funeral doom. Even though this band is definitely not for everyone out there to enjoy, if you are used to this kind of music you should like it. I recommend the following two songs because they contain every aspect that is characteristic for Void Of Silence: Elemental Pain, and Deamons From My Imagination. Dwell in misery, my friends.

Written on 21.04.2007 by
Lucas
If you're interested in extreme, often emotional and underground music, check out my reviews. I retired from reviewing, but I really used to be into that stuff.
More reviews by Lucas ››