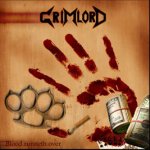 
Well well, this is uncommon, a power metal band from Poland. As we all know, Poland isn't really famous for its rich power metal fauna. However no rule without exceptions, and accordingly here we have Grimlord; from a country that doesn't fit to the genre, a name that isn't typical for it either and an album cover which could be pretty much everything but power metal.

The albums kicks off with March Of Martyrs, an instrumental which seems quite standard, but sounds really good at the same time, nothing very original, but it just sounds great. Yet already on the second track my positive first impression had to make way, the reason being the vocals. The vocalist in this band is horrible for power metal. It's quite a shame really because although the rest of the music is actually really good, although nothing new or original, the vocals just ruin it for me. They aren't special at all, quite typical power metal vocals which don't try to go all too high all too often, but just executed pretty badly. The guitar lines however, although being very standard riffs, are executed very well and the drumming is very rhythmic, like I already said the musicianship is just really enjoyable by itself and that is pretty much all that can be said about it.

In the album as such there is some variation. For example the sixth track 'No Surrender!!!' (in which the vocals sound atrocious though, because it's a slower track) or 'It Bites You!' which has some very interesting breaks, track ten, just titled 'X' is a short (48 seconds) drum solo. Further there are a lot of interesting musical breaks throughout the whole CD and a lot of short voice and other samples thrown in at various places.

To sum this up, Grimlord's instrumental musicianship is far from bad, really pleasant is the most fitting description, however the songwriting is mediocre and the vocals pretty much ruin the musical experience for me. Grimlord, you could have quite some potential, but first get a new vocalist! Or go on without one, for me personally, the instrumental opening track is the best song on this CD.