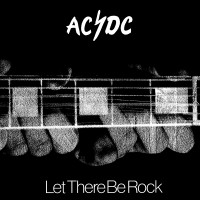 
A legendary album for a legendary band. Let There Be Rock, made in 1977, pushes us to this tragic thought: "what if AC DC was right and everybody else was wrong?". This album was definitely going to change the way to think about rock'n'roll, not only for the band, but also for the next generations of musicians. Let There Be Rock, as it was emphasizing the guitars and had a perfect production, was going to be the milestone of the real international success of this band, putting it out of the marasm of a boring future in Australia, a country that was too narrow-minded - at this moment- for a band with so much ambition.

The Young brothers, Angus and Malcolm, decided that rock'n'roll could as well keep its basic structures with a usual rhythm, but at the same time become something more creative and daring. So, the legendary "Let there be rock" is the perfect application of this new state of mind, making of this track the greatest success of rock'n' roll. This song gives the lion's share to the natural feeling of Angus, whose guitar never stops telling us the most beautiful story of all time, the rock'n'roll. The love of this music should flash back on the listener: every note, every solo is an ode, an invocation, a declaration. And our favourite schoolboy enjoys his music on every track, he shows his soul of virtuoso.

The powerful "Whole lotta Rosie" also belongs to the Hall Of Fame of the legendary tracks, as it creates such a perfect osmosis between guitarist Angus Young and singer Bon Scott that it succeeds in making the roughest and the most tattoed of us cry. Bon Scott also changes some tracks like "Hell ain't a bad place to be" and "Dog eat dog" into masterpieces of bad spirit, and also shows all his ability. The musicians obviously have fun, and everything seems easy, because they master their instruments so well. The wonderful "Bad boy boogie" brings emotion and is eager to bring us to this hell that they have promised for so long. Then comes a devilish track with a strong rhythm: "Problem child" and its corrosive riff tells that hell is just a place where the bad boys gather to play rock'n'roll. Then, add "Go down", the first track of the album, and it's over.

After that, AC DC never never made a step out of this way, and has still stuck to this image that, contrary to what fools and jealous people say, has never been commercial or conventional. Finally, we still don't know if everybody else is wrong (not sure), but AC DC was sure right...
Written by Gorey | 07.06.2004