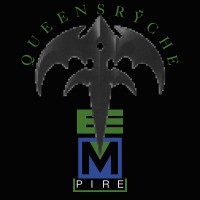 
There has to be something that noone could ever reproach the guys of Queensrÿche, it's to overload their songs with badly-written riffs. Evidence can be this masterpiece from the beginning 90's, soberly entitled 'Empire'. Like on the previous release ('Operation: Mindcrime'), the same elements guarantee the artistic success of the band, like the wonderful vocals of Geoff Tate, the overly powerful beatings of Scott Rockenfield, and the subtle guitar playing of Chris De Garmo.

This album is the landmark of their real international recognition, as far as popularity is concerned. It can as well be considered as a little revolution, so elaborated are the vocal and instrumental techniques. 'Empire' is also characterized by a more important use of clean guitars, unusual tempos and a clearer sound for the electric guitars. The perfect illustation of this new state of mind is the ballad 'Silent Lucidity', in which the atmosperic vocals have the biggest importance, and give more power to this astounding track.

The song 'Empire' also proves that the band follows his tradition of fighting against social injustices. This theme of the fight can be found again in the catchy 'Resistance', while some other songs like 'Best I Can' , while emphasizing the heavier bass-playing on a faster tempo, also enlightenthe need of a personal commitment in life, under whichever form it can take. Some other tracks are breathtakingly deep and emotional like 'Jet City Woman' or the excellent 'Another Rainy Night Without You'.

In a nutshell, maybe more than anything else, 'Empire' is a ticket to professionalism. This album has a soul, a style that the previous one didn't have. With its flawless production, 'Empire' is a real goldmine, a kind of bridge between heavy metal and classic hard rock. In its genre, this album has long been an exception that everyone now needs to rediscover.
Written by Gorey | 19.06.2004