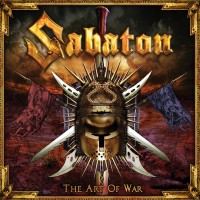 
So, here is another album from the Swedish Sabaton, this one named "Art of War" after the war manual written by Chinese leader and genius strategist, Sun Tzu.

Sun Tzu says, "There are roads which must not be followed, armies which must be not attacked, towns which must not be besieged, bands that you must know and albums that must be heard..." Well, maybe old Sun Tzu didn't utter those last two sentences, but he didn´t know Sabaton.

This release does not differ greatly from their previous albums. Sabaton didn´t push too hard in coming up with something new, they got a little bit better at doing what they do best. They gives us what we want, and what they give to us is another damn good portion of great Heavy Metal. If you already liked previous albums, you will also like this one as well. "Art of War" is more epic, but otherwise you´ll get everything you want from Sabaton: fantastic melodies and catchy songs.

Sun Tzu also said, "The art of war is of vital importance to the State. It is a matter of life and death, a road either to safety or to ruin." That is opener of an album, after this, Sabaton unleash unto us with a full force with "Ghost Division" and continues with the title track, "Art of War" and the fantastic "40:1".
In "Unbreakable" I feel influence by Black Sabbath´s "National Acrobat", I think, it has a similar guitar riff, it however no reproach. I must highlight in my opinion best song of album "Cliffs of Gallipoli", great rhythmically and very catchy. I don´t want write here, too much about every song, listening of an album is better than hundred words. Every one of the songs are really great shows of talents, enthusiasm and splendid lyrics of the band.

I don´t know why, but when I hear Sabaton, have a uncontrollable urge to jump, scream, and bang my head with hands up, and I haven´t that feeling from other bands. Sabaton's music is something different and I can´t say what is it. How one of my friend said, is it combination of classic Heavy Metal and influence by bands like Rammstein. Maybe, he had truth, I really can´t say. However, there´s something that compels me to listen to Sabaton again and again. I hold them in the same respect as Judas Priest and Blind Guardian, my personal metal favorites. "Art of War" is great piece of metal and with this album is Sabaton a bit closer to the Heavy Metal throne.