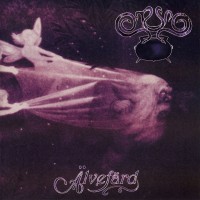 
In 1998, Swedish folk metal band Otyg released their first album entitled Älvefärd. The band includes Andreas "Vintersorg" Hedlund on vocals and he offers a fair deal of originality to the band with his clean vocals, all in Swedish. Otyg also uses a female vocalist, Cia Hedmark, who also plays the violin throughout. Other instruments used are the lute, keyed fiddle and mouth harp, all give the album an extremely folky feel.

The music is simply beautiful and catchy. When listening to the album, you can just picture a bunch of vikings united after a battle downing a few beers and for a moment you dream of being one of them. But it isn't just the vikings that come to mind, the album carries a medieval feel because of the use of traditional instruments. The album also blends bouncy tracks like the excellent "I Trollberg Och Skog" or "Ulvskrede" and more melodramtic tracks like "Alvadimmans Omdaning" or "I Hostlig Draky" which somehow generate a sense of sadness without making you want to slit your wrists.

On the whole, Älvefärd is a very good debut album which has only been followed up by the equally entertaining and well worked Sagovindars Boning. The band has been on hold since 2002, and one can only hope they do one day release new material even if it would be hard to match their previous work. So, anyone looking for a good folk sound I say to you "bottoms up!" and enjoy.