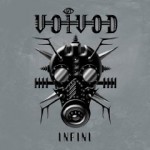 
It is utterly pointless to actually review Infini, Voivod's final album. Listening to this record, I can't help but conclude that it was not released to make waves in the industry, attract new fans or break musical barriers. No, this album exists simply to make sure that material recorded by Piggy D'Amour before his untimely death gets released. It's more like a documentary of what the legendary guitar player came up with than a brand new narrative that can stand on its own.

Consequently, this is a comfortably average album that doesn't really live up to the band's legacy. It will satisfy neither fans of Voivod's brutal yet technical thrash days nor those of us that dig the psychedelic, spacey stuff that appeared on Nothingface, Angel Rat and Outer Limits. Instead, Infini sounds like mid-tempo thrash-rock performed by a bunch of grumpy old men bitching about society. In other words, this album sounds exactly the same as Katorz and Voivod. And this is OK. By far my favorite feature of these albums was Snake's fantastically cynical-sounding snarl and we have plenty of this on Infini, whether he is complaining about "Krap Radio" or consumerism in "Treasure Chase". The guys in Voivod also made sure that any of the remaining solos that existed on the laptop that Piggy filled up with material before he passed away got used and this is often done pretty well, such as on "Room With A V.U.". Sadly, due to the limited amount of riffs available, a lot of the songs here are nevertheless based on quite simplistic progressions that amount to little more than filler. A shame, but not surprising in the least.

In the end, Infini is not really a new album to be excited about or infuriated with, depending on expectations. It is a lovingly crafted shrine to Piggy, with his raw riffs and psychedelic solos exhibited as if in an aural gallery. This is for the fans and they will be happy. Everyone else, listen to the classics first.

Written on 29.06.2009 by
jupitreas
With Metal Storm since 2002, jupitreas has been subjecting the masses to his reviews for quite a while now. He lives in Warsaw, Poland, where he does his best to avoid prosecution for being so cool.
More reviews by jupitreas ››