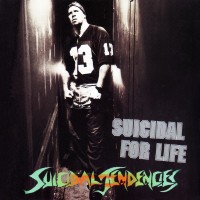 
This album is no doubt a Suicidal Tendencies classic!

When I was a young boy I related to this bands music because I liked Red Hot Chilli Peppers a lot and Suicidal Tendencies seemed to me to be in the same line that RHCP left in the 80's, Funk, Thrash and Hardcore Punk mix from L.A streets hell!! (of course ST is older and kept this path)

But enough bullshit, the album begins with a smooth but consistent funk intro which is musical company for a Mike's crazy monologue, showing the musical skills of the band and the self confidence because they are crazy hehe... and don't give a shit about the attitude of others. Talking about caring...the second track "Don't Give A Fuck" which is a song with brutal riffs and fine funk arrangements on the guitars, lots of back beats and fine & cool job on the bass, fast and faster scales that leave the song without an empty space. The sound of the album is huge.
So you can appreciate the good work in "No Fuck'n Problem", is a logical continuation of the 2nd song, slower but with a well done musically.

Then we have "Suicyco Muthafucka" it begins with a heavy riff with lots of breaks n' goes, and a creepy arpeggio in the background to set the atmosphere to initiate the creepiest lyrics of the album, (this guy is very disturbed!!) the song's about a guy who had been through a lobotomy and still walking around the streets!!, a catchy chorus makes the song a key for this album.

The next song "Fucked up just right" is a funk metal that reminds me a little of the early works of Faith No More and RHCP but with the brutal heaviness of Suicidal; an intricate structure, constant changes, the perfect drumming of Jimmy D'Grasso and the Mike Muir's unstoppable madness make this song memorable.

"No Bullshit" is the sixth song in this crazy album, beginning with a progressive riff and an always present chorus to enter in a deep bass driven insanity about taking no shit from the coventional and self-righteousness in society, a constant theme in punk and ST lyrics.

"What Else Could I Do?" is the perfect title to this song cause the guys begin the song with an explosion of bestial rhythms perfectly executed, the variety of musical approach is present besides the violence in the next tracks ("What You Need's A Friend", "I Wouldn't Mind" , "Depression and Anguish", "Evil"), until you get to "Love Vs. Loneliness" a song about a deeply disturbed person isolated by drugs and mental state. This album close with an outro in the same vibe as the intro telling you a non-conformist message in order to think for yourself.

Finally I have to mention the incredible job on the guitars by Rocky George doing that solos and arrangements, the killer riffs by Mike Clark and awesome bass by Rob Trujillo (I think Metallica do not deserve this guy) Dave Mustaine surely listened to this album some day and noticed how precise Jimmy D'Grasso is.

Maybe this review is long but this cyco album deserves it!!