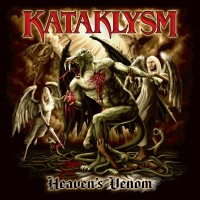 
Kataklysm has been on the metal scene for a long time. Long enough to lose musical focus. Happily this is not the case as they have come back with one hell of a record. Heaven's Venom is the god forsaken love child of In The Arms Of Devastation and Serenity Of Fire. It's melodic and crushing to say the least.

The opening song, "A Soulless God," is a good start to the album: it sets the tone, has a cool chorus, and includes the crazy scream vocals I loved from In The Arms of Devastation (seemed to be lacking in Prevail). However the 40 second intro is a bit much. That voice is also becoming overused. It has opened the last couple Kataklysm albums. Other notable songs are "Determined (Vows of Venegence)," "Hail The Renegade" and "At The Edge Of The World." The song "Faith Made Of Shrapnel" has a very interesting slower part in it. It also features the most metal title on the album.

The album has some less than stellar moments as well. Their first single, "Push The Venom" I found to be one of the weaker songs. It's set at a very monotonous pace. Lyrics also seem rushed at times. The first 15 seconds of "Blind Savior" is very annoying. However the rest of the song is reminiscent of "The Road To Devastation." "Das Feuer Lebt (Anthem)" isn't very good either.

Heaven's Venom sounds very polished, and is one of their most inspired offerings of their 19 year career. A big step above Prevail. It sounds like Kataklysm.