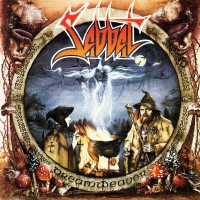 
Britains Sabbat are one of the more underrated thrash metal acts of the 80's, After hearing this album numerous times it really boggles my mind as to why that is, Dreamweaver (Reflections of our yesterdays) has all the ingredients necessary to make a classic thrash metal album; blistering riffs, amazing lyrics, great songwriting and a solid production combine together to create (in my opinion) one of the best thrash metal albums ever created.

Dreamweaver is a concept album based on the book "The Way of Wyrd" which is a story of a christian missionary who embarks on a pilgrimage to convert pagans in south England, It is an interesting subject that could come off as a total mess, but Martin Walkyier's lyrics do the story justice with a degree of lyrical sophistication that most thrash bands lack. Martin's lyrics are pretty much unequaled in thrash circles having an almost "Thespian" like quality to them that are propelled forward by his venomous rasps and shrieks that will genuinely make you want to read the lyrics and follow the story. He has a habit of cramming as many lyrics into each song as he possibly can which leads me to believe that the man possesses a third lung as he is constantly spewing lyrics out so fast without stopping for a breath.

The music itself is equally worthwhile, Andy Sneap and Simon Jones keep things interesting by creating intricate and hard hitting riffs that come flying at you from all directions. The band is absolutely relentless with its attack and never seems to be low on ideas as evidenced by songs such as "The Best of Enemies" a song that contains a small acoustic section before exploding back into riff laden intensity and "How Have the Mighty Fallen?" Both songs are just over 8 minutes long and don't come close to wearing out their welcome. Other highlights include "The Clerical Conspiracy" and "Do Dark Horses Dream of Nightmares?" which contain more great riffs and of course the sophisticated wordplay of Walkyier's. A nod should also be given to "The Advent of Insanity" an entirely acoustic number with clean singing that showcases the band's softer side. The rest of the band do a competent job with their given instruments. The drumming and basswork are also well done but it is Walkyier and Sneap who are the main attractions. The only real flaw is that it can take a couple of spins in order for the album to get its hooks into you, but once you become familiar with this album it will prove highly rewarding with repeated listens.

In short, if you like thrash metal you will like this album. I can easily recommend this and their first album A History of a Time to Come to any fan of thrash metal, it is a true gem and classic of the genre that belongs in any thrash fans collection (Both albums were reissued with a remastered sound in 2007 (They are both worth your time and money).