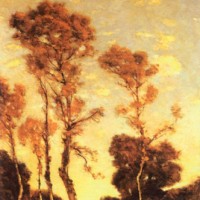 
One of the things that makes a great album, especially in the black metal or depressive black metal genres is atmosphere. The ability of a band to capture a certain atmosphere whether it be depressive and melancholic, or hateful and dark, the atmosphere of a black metal album is important. This album delivers a thick, sorrowful, and very natural atmosphere. Out of the four Drudkh albums I've listened to, this one is by far their best.

This album will capture the listener and draw them away into the middle of a forest in autumn; hence the title: Autumn Aurora. The introduction is an acoustic piece with various nature sound effects. It's a perfect lead in to the rest of the album. What I immediately notice is how the guitar tone works with the synth and keyboards to provide a sorrowful and completely natural sound. It captures the essence of autumn fading into winter. The guitar tone is fuzzy and not too high in the mix, but no too low either. The riffing style is very similar to that of Burzum; think fuzzy guitar tones and depressive and emotional melodies. Every so often they throw in some nice guitar leads that add a wealth of feeling to the atmosphere. There are also a few nice acoustic passages to be found as well.

The synth is used quite effectively on this album as well, many times it's more prominent in the mix than the guitars, and the melodies always have a very melodic and yet sorrowful feel to them. One of the best examples of this is the track "Glare Of Autumn". The guitar drones on in a hypnotizing riff while the keyboards play a very profound and emotive melody on top of it. To me the way the synth and guitar work together to create the atmosphere is the best part of this album.

There is also credit to be given to the drum work in this album. Many times it is a hypnotic beat that's very repetitive, but it's very effective throughout the entire album. On occasion the drums play some pretty nice fills and do more than just keep the traditional hypnotic depressive style beats. Sometimes they come out of the mix and really shine. There is a wealth of double bass on this album, and the drums don't overwhelm everything they are pretty even in the mix with everything.

The last point is about the vocals. They aren't necessarily the most memorable thing about the album, but they are very effective. The vocal tone is more of a snarl or mid-pitched growl than the usual black metal screech, and it sounds like there is a good deal of reverb added. You can feel the sorrowful emotion as he snarls. The vocals are also very well-produced. The production isn't overly polished mind you, but it has the exact effect I'm sure they were going for: raw emotion and atmosphere.

To summarize: the word I've used most is atmosphere, and it's for a good reason. The vocals, guitar, synth and drums - the bass being pretty much inaudible - work together to create the perfect atmosphere of the beauty of autumn and yet the sorrow and death of the beginning of winter. The album is like listening to all the emotions conveyed from late autumn to early winter. The sound created is a very natural, very emotional, very thick atmospheric sound and it's done perfectly. This album has no flaws, everything fits together to create an album only gets more enjoyable the more you listen. Beware: if you start the album, you will get lost in its atmosphere and be hypnotized by its beauty.