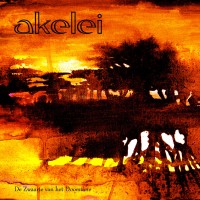 
For doom elitists, Akelei needs no introduction. They are beyond doubt, along with Procession, two of the finest legions that the doom army has at its disposal. With their first offering De Zwaarte Van Het Doorstane (which roughly means The Burden of the Weathered) the North-Brabant-based Dutch quartet have utterly scorched the last hope for mankind to avoid the sorrowful dirges of despair.

Sweepingly swerving from the orthodox garrulous rough-hewn sadness-delving tumult that swamped practically all the antediluvian doom metal territories during the Reverend Bizarre and Warning era, De Zwaarte Van Het Doorstane saunters instead around demulcent atmospheric convalescent coronachs, cremating the first two verses of the doom gospel? You don't need oracles like Miskatonic Foundation or Spikefarm to make doom-ish river-parching music nor a Robert Lowe clone to tangle your brain to knots with brilliant clean hollow vocals. Akelei, with this self-released album (which by the way was recorded at the ninth Dutch Doom Days festival), and Misha Nuis with modest vocal capabilities and a blushing narrow history, have blessed the world with one of the absolute doom top albums of 2010. Quite impressive for an unsigned band, isn't it?

Akelei's music wanders somewhere between Forlorn's staggering slow-fibered tempos and loud-distorted guitar ramblings ("Verlangen") and Isole's keyboard-less passages ("Een Droom In 6/8"), with dazzling shades of Svart's atmospheric post-rock-driven patterns ("Meer Dan Je Ziet"), all thrust together in a hybrid vortex of relentless heaviness ("De Zwaarte"), with, at the end, a delicate female touch by Skumring's Cecilie Langlie's ethereal vocals("Duett"). It's doom, but it's not depressive, which is always a good thing in my book.

Let me make it short and simple, this album is for everybody, really. You don't have to be into doom to enjoy it; it has a little bit of everything and is accessible on the first listen.