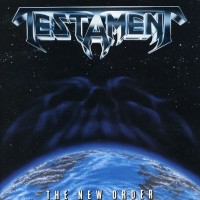 
Released by the end of the '80s in 1988, when other thrash metal bands' directions began to divert from basic Bay Area Thrashing to different, broader styles (Metallica's change to a more mainstream and arguably progressive style by ...And Justice for All and Slayer's South of Heaven which featured slower music), Testament come with their second studio album still formed of mostly pure thrash metal, with a few groovy tunes here and there. The album is, like any other thrash metal album, full of riffs, catchy songs, speed and interesting lyrical topics.

As soon as "Eerie Inhabitants" finishes its gloomy, atmospheric entrance, the atmosphere of the album itself begins to kick in, with Peterson's guitar and Clemente's drums forming a great combination for the background, Skolnick playing very decent and memorable solos and riffs, and Chuck Billy providing energetic and strong vocals (even though they're highly similar to 80s James Hetfield). The only weak instrumentalist of the album is perhaps the bassist Greg Christian, who doesn't have much of a role to offer to the music but really mediocre stuff, and even though, he isn't half bad.

Highlights of the album are "Trial By Fire", which features a decent intro and a great song overall (minus the depth of the lyrics), "The New Order", which is also pretty strong and features a great solo and riff, "Eerie Inhabitants", which is one of the greatest songs on the album and finally their cover of Aerosmith's "Nobody's Fault", which is - in my opinion - far better than the original song (especially the vocals and the production).

The weakness of the album perhaps lies within two things; the unoriginality of it and its repetitiveness. When you reach songs such as "A Day of Reckoning" and "Disciples of the Watch", it becomes repetitive with the same atmosphere, the same vocal style and merely a few differences in the tunes themselves. Also, the two instrumentals included ("Hypnosis" / "Musical Death (A Dirge)"), while showcasing Skolnick's prowess and creativity, cannot rival other well-known thrash metal instrumentals (say "Orion" or "The Call of Ktulu" for example), are a bit unoriginal and really not that catchy, and are very limited by length (one is around two minutes and the other is around four). Also, to me, they really don't fit with the album's overall feel, and the last track is really similar to "The Call of Ktulu" in both being the instrumental finisher of an album, its feel, and even Peterson's riff sounds too similar to it.

Overall, it is a great listen, recommended for any metalhead / thrasher out there, and basically one of Testament's greatest albums if not their greatest album overall. (Maybe because I don't like The Legacy that much myself).