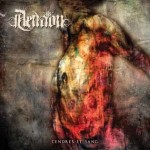 
Many bands coming from Greece whenever they chose a more aggressive sound pathway in the metal scene their most apparent references used to rise from Rotting Christ and Septicflesh, at least in the past. Within the last few years some things seem to be changing and Aenaon is one those "heretic" bands that had the vision/will to not worship what's already famous and follow a different road. Cendres Et Sang (Ashes And Blood) is their debut album and it's here to propose a more avant-garde aspect of black metal. The cover artwork (Lukasz Wodynski ) is tempting enough and holds a sullen grandeur of its own, a very good first impression is always welcome!

The saxophone during the intro ("Kafkaesque" - what a nice title) lends some hints n' tips of what will follow and "Suncord" which holds a Ved Buens Ende accent concurs. The soundscape becomes clearer and a maelstrom of ideas is about to unfold in front of your very... ears. We're dealing with a work that's paying its small tribute to aspects of more traditional black metal and at the same time pins the term "traditional" on the wall until it bleeds experimentation. Apart from Ved Buens Ende you will witness some references to Dødheimsgard, Satyricon and Shining to name a few that come to mind at the moment. Of course it's not only about influences, it's also about ideas and inspiration, it's all about respect and self-expression and Aenaon succeed in it. Order and disorder forge an ill-natured alliance that holds its basis in black metal with three neurons that transmit jazzy, some sort of mechanical vibe and avant-garde (the Norwegian way) signals equally.

Everyone involved in this recording plays an important role and it's quite distinctive, from the band members to the guest musicians (V'gandr of Aeternus and Helheim, Thomais Chatzigianni of Dakrya etc). The guitar work is fabulous; sliding melodies, razor-sharp or maneuvering riffing with a strength of its own, even some beautiful soloing ideas (you have to love the way "Black Nerve" opens) among a wide variety of ways of expression that enrich the soundscape. There's definitely something odd and welcome at the same time within some effects in the guitars and in general, mental euphoria, dissonance and a variety of conditions/emotions come to the surface. The vocals are vibrant, they lend their own pulse in the compositions. Astrous' throat is a coal mine, ranging from edgy and sharp husky grunts to ecstatic boiling (un)clean singing that entrances the atmosphere. Last but not least, the rhythm section is dynamic, non-verbose but with interesting key signatures and the most important thing is, it's omnipresent and not buried, after all the spot-on production is complimenting the album.

The album couldn't just reach the end with an outro or any other composition. The In Heaven cover (from David Lynch's Eraserhead soundtrack) is of extraterrestrial beauty, the more i listen to it the better it gets. Emotionally pompous piano melodies and a magnificent interpretation from Thomais in a Gitane Demone meets Mary (Mary And The Boy) delirium from a daydream nightmare that comes to life when the band emerges to make the overall ambiance even more suffocating. Had I been David Lynch, I'd work on an abstract video clip with Aenaon.

Anyway, debuts like Cendres Et Sang make this world a better place to live in, as for me, I'm already waiting for their second attempt.

Written on 25.06.2011 by
KwonVerge
"It is myself I have never met, whose face is pasted on the underside of my mind."
More reviews by KwonVerge ››