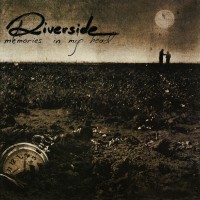 
01. Goodbye Sweet Innocence
02. Living In The Past
03. Forgotten Land


Riverside really blew me away with their last album Anno Domini High Definition, and after two years of checking out their back catalogue and attending one little show, I have become a fan of the band. I believe that Riverside are one of the best prog bands around, and my expectations for this EP were pretty high, and I was also waiting for something in the vein of ADHD.

Partly because of those expectations, I was deeply disappointed with Memories In My Head when I listened to it for the first couple of times. The three ten-minute songs sounded overstretched and boring due to the same slow tempo, samey guitar solos in the style of Piotr Grudzinski, and just seemingly unimpressive songwriting. After giving this EP more proper listens in the right mood, my ears and mind received a different image. The mood, or at least a correct expectation, plays an important role in perceiving and even enjoying this deeply melancholic prog release. Memories In My Head is still far from perfection, but the Polish masters, as usual, have managed to write something that screams quality prog rock and, while sounding very Riversidey, testifies to the band's continuing desire to develop and experiment.

The melancholic signature sound, which has been present on all of Riverside's albums, is present here too, but with a larger focus on creating a moody, sad, and sometimes even psychedelic ambience on each song. The band seem to have decided to revisit the Reality Dream Trilogy and especially delve into brooding and desperate but also angry atmosphere through long, slowly developing songs, so there is certain resemblance to the longer songs on the first three albums. All these are done with the customary guitar subtlety, bass prominence and charismatic voice of Mariusz Duda. Overall, this is the Riverside we love: both sentimental and angry, convoluted and catchy, overwhelming and relaxing.

What prevents Memories In My Head from being really successful is, after all, the songwriting. There are definitely some great moments on all the songs, be it piercing leads, groovy bass, emotional build-ups, catchy vocal lines and transitions or those great dirty drawling keyboards, but there are some weak - one may call them boring - spots as well, like the first half of "Goodbye Sweet Innocence." Riverside is a band of great musicians, who know what teamwork is, but the problem is that they did not manage to bring up the characteristics mentioned at the end of the last paragraph with the passion and extremity that they did on the previous releases. Memories In My Head is quite good, but Riverside can do better.