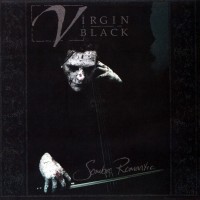 
Nowadays Gothic is a term widely used in music. Somehow the term has been vulgarized along the years loosing its true identity within the diverse musical styles to which it is applied. Hopefully, a handful of bands revived the true meaning of Gothic and Virgin Black is one of them. Introduced to me by my beautiful wife and Gothic expert, Emalaith, Virgin Black is a smashing combo of musicians from Australia led by composers extraordinaire Rowan London [vocals, piano, keyboards] and Samantha Escarbe [guitars, cello]. The other musicians are Dino Cello [drums], Craig Edis [guitars, vocals] and Ian Miller [bass, vocals]. Their debut album Sombre Romantic is as beautiful as it is disturbing, a Gothic masterpiece.

In true Gothic fashion, a spine-chilling choir is spicing things up in the vocal department while guitar riffs, piano melodies and cello phantasmagorias create a sublime blend. The tempos are generally slow with the occasional burst of speed and overall the term "atmospheric" describes the general ambiance well. The vocals are another strong point of the album, with several layers of rich lines led by Rowan London's amazing voice. This guy has one of the most original styles out there, using mostly clean vocals sounding from desperate to insane most of the time. He's conveying unusual feelings that in addition with the creepy choir form the darkest vocal parts ever. Just as striking is the guitar, particularly during the slow passages. Samantha has the unique ability to make her guitar sound like a cello, which may be due to the fact that the cello is her other, and probably her first, instrument. Truly amazing.

The influences are various throughout Sombre Romantic from symphonic orchestrations ['Opera De Romance'] to techno inspired rhythms ['Walk Without Limbs'] to psychotic experimental pieces bound in madness ['Of Your Beauty'] to Death/Black Metal ['Drink The Midnight Hymn', 'I Sleep With The Emperor']. This record is a journey to the depths of the human mind, perfectly "illustrated" by those mesmerizing guitar lines, incredible vocals and those celli to die for. Lyrically, the album is inspired by religious themes, which is not surprising, as Virgin Black's management for this album was MCM (Mittelstädt, Clayton, Mittelstädt), the group behind the wonderful US Christian Gothic band Saviour Machine.

Finally, the closing track is the zenith of Sombre Romantic. 'A Poet's Tears Of Porcelain' has an incredible momentum and features the best vocals from Rowan London while also including the catchiest chorus and the best guitar solo.

Note that some pressings of this record comes with a bonus CD called "Trance", which is an earlier work, more techno influenced and even more disturbing vocally but with a lower quality of production. While it's interesting to see the band's progression, none of these songs are comparable to the ones on "Sombre Romantic".

Sombre Romantic is a fantastic artistic album but also a juggernaut of depression, I warn you. It's one of those albums that won't leave your CD pile for a long time if you can overcome the darkness crafted in the music. One thing is certain, with such a debut album, Virgin Black is sure to appeal to an uncanny audience. So if you're not afraid of real Gothic Metal, jump in for the trip of your life.


Highlights: 'Museum Of Iscariot', 'Of Your Beauty', 'Drink The Midnight Hymn' and 'A Poet's Tears Of Porcelain'

Written on 26.07.2005 by
Dream Taster
Bringing you reviews of quality music and interesting questions such as: