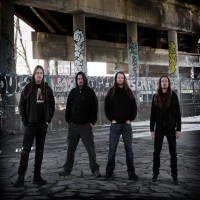 Originally released in 2004 via Galy Records, this updated version features a fully remastered recording of the album, also expanded to include two bonus tracks from the band's 2006 demo. This definitive edition will also be packaged in a new digipak format, designed by Sven De Calluwe of Aborted.

Formed in Montreal, Quebec at the end of 2001, Augury immediately made an impact in the Canadian death metal scene with their technical/classically-inspired progressive death metal attack. The unit entered the studio with Yannick St-Amand (Martyr, Unexpect) in 2004 to record their Concealed debut. The record was mixed by Jean-Francois Dagenais (Kataklysm, Misery Index) and then set loose upon the anxious public. After the release of Concealed, Augury signed with Nuclear Blast Records, who in 2009 unveiled the band's critically acclaimed 2009 album Fragmentary Evidence, further cementing the band's name into the upper ranks of the progressive death scene.