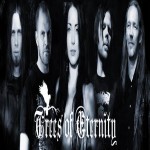 Trees Of Eternity, the doom/gothic metal project of Finnish guitarist Juha Raivio (Swallow The Sun) and singer Aleah Stanbridge, has revealed a guest vocalist that will appear on their upcoming debut album. It is Mick Moss of Antimatter fame.

The band posted this message: "Well folks.. Since the cat is kinda already out of the bag, here is a little update regarding some of the guest vocals on our album. We are very pleased to let you know that Mick Moss from the excellent melancholic down tempo act Antimatter just finished recording his guest vocals for the song 'Condemned To Silence' where he is adding some doubles and harmonies with Aleah's vocals. We are loving the sound of it, but then again, how can you go wrong with a voice like his?"

Furthermore, Fredrik "North" Norrman will be their second guitarist on the album, and will also be joining Trees Of Eternity live. Fredrik played in Katatonia between 1994-2009 (Brave Murder Day until Night Is The New Day), and he is still active with death/doom metal act October Tide. Kai Hahto (Wintersun, Swallow The Sun) recorded the drums, and Jens Bogren will be handling the mixing of the album.