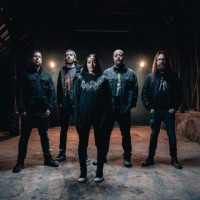 After Napalm Death performed through an experimental sculptural sound system that caused the ceramic structures to slowly crack, now London brutal death metallers Unfathomable Ruination will be performing regularly outside the Gherkin in London throughout July and early August and they will be doing so from inside a soundproof box.

The band accepted the challenge of Portuguese artist João Onofre to perform inside this unique performance art piece, Box Sized Die, which is part of the public exhibition Sculpture in the City. Performance times: July 3rd at 6 & 7pm, 4 July-1 August 2014 at 6pm Wednesday-Friday. If you are in town, maybe you can check it out.

"The box is soundproofed, determining and restricting the performance's duration to the length of time in which the oxygen is expended. Outside the cube, viewers observe its strange vibrations, only viewing the band's entrance and exit to the performance space."

So, basically Unfathomable Ruination will be performing until they run out of oxygen. Hopefully, the term "death metal" will not be taken too literally.