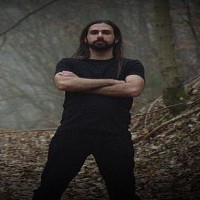 One-man black metal outfit Mystras unveil additional details in connection with its sophomore studio album, Empires Vanquished And Dismantled. It's comprised of 9 tracks and set to be released on November 5th through I, Voidhanger Records. Recorded, mixed and mastered by Ayloss at the Stellar Auditorium. Via Bandcamp widget you can give a spin to the album's two advance tracks, "The Fall Of The Kingdom Of Jerusalem" and "To The Builders".

While Mystras' previous album "Castles Conquered and Reclaimed" dealt with peasant uprisings, new album Empires Vanquished And Dismantled moves into the topic of medieval imperialism, following the band's motto 'Medieval Black Metal Against Empire and Aristocracy'. The central point of the album consists of the first two metal songs, "On The Promises Of Angels" and the 14-minute epic "The Fall Of The Kingdom Of Jerusalem", both thematically dealing with the Crusades as the progenitor of the European colonialism of the 15th century: the first song tells about the successful conquest of Jerusalem, while the second narrates the history of its loss in the hands of Saladin.

Sole member Ayloss (Spectral Lore) couldn't obviously leave out a song centered around the premises of the Byzantine Empire, and in fact "The Favor Of The Saints" deals with the successful Bulgarian uprising lead by Peter and Asen in the 12th century, one of the major blows which lead to the weakening and eventual dissolution of the Empire.

Musically, Empires Vanquished And Dismantled follows the same stylistic path of Mystras' debut but with a much clearer and stronger sound, and without betraying the lo-fi and atmospheric aesthetics of the project. Much more focus and effort was given into the folk tracks, produced with the help of six session musicians and their exotic instruments, like the Turkish ney, the violin and the santoor, while two singers lent their powerful voices into the instrumentals: Nina Saeidi from the doom band Lowen, and opera singer Carling Chiu.

Where "Castles..." was mostly centered around European medieval music, the focus in "Empires..." changes towards the East, featuring the ney - played by ney specialist Stamatis Zafeiropoulos - as the focal point of the folk tracks, which include covers of Arabic, Byzantine and German tunes as well as the original drone piece "Cheragheh Zolmezalem (Oppression's Fire)", written on Persian and Arabic modes.