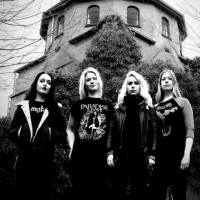 Death doomers Konvent are delighted to announce the release of their sophomore full length effort, Call Down The Sun, on March 11th (Napalm Records). The successor to 2020 debut Puritan Masochism was recorded and mixed at Ballade Studios, Sweden. Mastered at Audiosiege Studio in Portland, OR. The Danish quartet also present the album's first single, "Grains".

"Grains" is about realizing the repetition of self-destructive patterns and not knowing how to break out of that cycle. It is the first Konvent song containing danish lyrics, as we felt like the song called for it," vocalist Rikke comments.

"In our search for a video producer, we found Martin Goltermann and we quickly shared the same vision for the video; atmospheric shots of sand and the sea reflecting the lyrics and a black-haired woman's journey. As we were in a hurry, Julie had to step in and embody the part of the woman. After two days of shooting by the windy coast and in our cold rehearsal space, Martin wanted to go out again with Julie to get a few final shots. However, it had been snowing during the night and he managed to capture these beautiful shots of Julie gliding through the winter landscape. We loved it so much that we scrapped all the other footage."