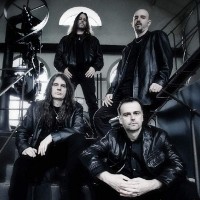 "Violent Shadows", the second advance single from Blind Guardian's upcoming The God Machine full length, has premiered online. The song is supported by a performance video, directed by Dirk Behlau for Pixeleye Industries.


Singer Hansi Kürsch states: "Since our WWW Virtual Wacken Performance, "Violent Shadows" threw a massive, already overpowering shade on the expectations of The God Machine. We were pretty aware of the effects that the number would develop. The message is quite clear in my opinion: We're able to go straight forward! With the single release you get a very concise impression of the album's precision and intensity. Just one more thing: Everybody who thinks that the wait for the remaining five songs isn't worth it, is completely wrong! Every single song is a firework and shines even brighter in context. Remember my words, enjoy 'Violent Shadows' and pre-order The God Machine. Today, September 2nd's already yesterday.