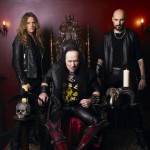 British heavy metal legends Venom haven't put out a studio album since 2018's Storm The Gates, but the wait for a new record is about to be over, as frontman and bassist Conrad "Cronos" Lant revealed in an interview at last weekend's Wacken Open Air festival in Wacken, Germany that they are putting the finishing touches on it.

Cronos explained: "We had a bit of a hassle because of the pandemic; we couldn't meet in the studio and all that sort of shit. So that knocked everything all to hell. If that hadn't happened, the album would be out by now. But we're just doing the fine tuning, really, and working on individual shows for now. Venom have never been a big touring type of band. We like to just pop up and blow the place to hell."