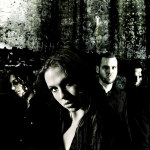 German female-fronted gothic metallers Flowing Tears have set "Thy Kingdom Gone" as the title of their new album, tentatively due in October via Ascendance Records.
It will be a concept album containing 12 songs.

Posted by the band on their MySpace site:

''It has probably become the darkest and most intense one we ever did. We are really excited about how this one turned out and can't wait for you to listen to it!
I think we really managed to capture the essence of what Flowing Tears is about: there is tons of really heavy melancholic guitar stuff, tons of atmospheres, and probably the most personal and dedicated lyrics we have ever written.

Somehow the album pretty much breathes the spirit of albums like "Joy parade" or "Jade" in terms of atmosphere and density, even though it..s much heavier. And even though the album feels very homogenous, it is probably our most varied one. There is a lot to discover...you'll be surprised. Expect an intense one. No party music, not meant to have a good time with definitely.

Moreover we are excited to announce that the artwork for the album will be done by Seth Siro Anton, whom some of you might know from the great work he did for Moonspell, Soilwork or Paradise Lost lately.

A release is currently scheduled for October. There is no definite release date yet, but as soon as we have it, we will post it here, along with a complete tracklist and more detailed information.