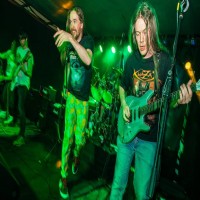 A Kiloton Of Fun - Gama Bomb Invade Paraguay
Or "How I Learned To Love The Bomb".

(Thanks to Pro Performance Paraguay, Sergio and Metal Ed for allowing us the use of Alex Olson's ace pictures. Salud! - EDIT NOTE, Pics are NOT uploading, will add later. Fuck it. See them here now)

So as at least a fistful of readers might know, several years ago we sold Rancho de COld in southern Arizona and moved way down to the heart of South America, Asuncion, Paraguay. Been here two years, missed a couple metal gigs early on as a gringo with no command of the language and, well, no friends who think Metallica/Megadeth are basically a step above elevator music and concerts being in barrios that might not be the best to wander around after midnight and a dozen cervezas.

Over time I've made friends with a lot of the hombres around town that homebrew. As it turns out not only do we share similar hop-fueled tastes, we also share a taste for more aggressive music. And when it was announced Gama Bomb would be coming to town, my friend Pablo, henceforth PaZuzu, more into the power metal side of things, said "We must go."
And so we did.

And to further tie down the connection between beer and metal, the Winter Metal Fest event was sponsored by Baltika Paraguay. ¬¬¬¬

So Gama Bomb, armed with a fistful of Paraguayan and Brazilian acts for the Winter Metal Fest used it as a launching point for their South American tour.

After meeting up at the Hard Rock for some pre-party action, we moseyed around the corner to Asboluto Rock. This was my first time at the venue. It was easily found as during the relative quiet of the 8pm Asuncion Centro you could hear the band raging a block and a half away. (Side note, going out at 8pm in Asuncion is like going to dinner at 4pm… before even the silver hairs line up outside Souper Salad. Nothing here starts until around midnight.) To call the venue a dive might be giving it too much credit. After a bit of a hallway you passed the bar on your left and ended up in vaguely cement cavern that might hold 100(?) people. It was dark. And dank. The walls were lined with blown up album cover banners from acts like Black Sabbath, Mercyful Fate and Iron Maiden.

So basically a great place to take in a metal gig. I can't wait to go back.

When we arrived the first couple (Paraguayan) bands - Nocturnal Predator and Into The Flesh had already played and fellow Paraguayos Aggressive Squad were on stage beating the shit out of their instruments.

Aggressive Squad played THRASH. Not thrash. Not even Thrash, but full on, balls to the wall THRASH. There wasn't anything particularly original about their set, not that thrash lends itself to terribly much originality, let alone 30 years on, but they with enough fervor that had me feeling like I was a young buck again. Tight riffing, convincing vocals, great groove, pounding drums and well executed soli… Really enjoyed their set. Enough so that I grabbed Pablo and made him interpret to chat with the band after their set. While some of the exact translation is lost (blame the Baltika), they should have a new album out soon. I look forward to making it the first Paraguayan metal album reviewed on this site.
Go to YouTube and Be Aggressive. B-E Aggressive.

During the time between sets, PaZuzu introduced me two of this co-workers. Neither spoke English, and my Guarani-infused-Spanish is still mierda, so conversation went through him. Which probably lead to the single most poignant and philosophical moment of an otherwise thrash and beer soaked night. One of his friends was sporting a denim vest with all the appropriate \m/ patches. The other a blue bandanna just over his eyes. When introductions were being made, I pointed and said "He listens to Suicidal Tendencies" (just referred to as "Suicidal" at the time, full band name used for tagging purposes). After a brief exchange culminating with me saying "Sorry my Spanish sucks", he said "you don't need to speak the same language to speak Suicidal."

And that, my friends, says it all. I'm a 40something gringo, he's a 20something Paraguayo. All our differences are trumped by appreciation of band from Venice, CA, USA. Metal is pretty fucking awesome as a unifier, isn't it?

Ressonancia Morfica took the stage next. And were too much for my amigo. While Aggressive Squad were, well, aggressive, RM were flat out psychopathic homicidal. The Manaus, Brazil natives played their grinding death set with murderous intent. "Solos? We ain't got time for solos." They just abused their instruments and the audience battering the audience with sonic abuse. All topped with Marcos, their vocalist/human bowling ball basically going into seizures on stage. Ok, not seizures maybe, but his vocal style altered between low end gurgling and high pitched shrieks all while having his eyes roll towards the back of his head and spasming and going through solo pseudo WWE moves . He even climbed off stage to the other side of barrier to not figuratively but *literally* butt heads with the audience. Intense set. Fun set.

Catch 'em on youtube, with the last 20 seconds of the clip being the most representative of their set. Both sonically and visually.

Nervochaos from Sao Paolo took stage next. They looked perhaps a tad more gothic, but their metal was a hybrid blackened thrash death. They smashed out a barrage of well executed tunes, but their set didn't resonate with me like Aggressive Squad or amuse me quite as much as the antics of Ressonancia Morfica. Once again, blame it on the Balikta. Between multiple trips to the bar and plenty of free samples, even with my tolerance I was cruising.

As I mentioned earlier, AS made me feel like a young buck again… with Gama Bomb shredding away I handed my beer to Pablo and joined Thrashatello, the mosh ninja, in the pit. When the thrash calls, you must answer. Don't remember too much of the set, aside from grinning ear to ear the entire time. They were just a Kiloton O' Fun. And, again, even with language barrier, bruises traded in the pit meant smiles and respect afterward.

Also a thanks to bassist Joe McGuigan for enduring my overly appreciative, enthusiastic and quite possibly rather drunken thanks/ramblings after the gig was over.

If you have a chance to see Gama Bomb in your town, do it. Liked the band beforehand, bought a couple albums, but not a candle to the fun of them live.

Finally, thanks to PaZuzu for alerting me to the event and breaking his extreme metal cherry with some of the openers.