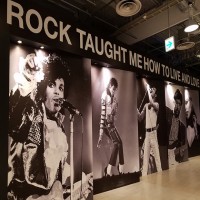 Ah, the Rock & Roll Hall of Fame (HoF), a chance to celebrate some of the biggest and most influential artists to ever rock out on a stage in front of an audience...and Dolly Parton. Yes, metalheads, the HoF has long been as divisive an argument in metal circles as the argument over whether Iron Maiden or Metallica are the better band (my money’s on Maiden, for what it’s worth), with those angry that the token metal nominees were once again overlooked in favour of some artist whose only metal credentials were having once been photographed in public wearing a Slayer t-shirt, and the rest who say it doesn’t really matter.

After having read through ScreamingSteel’s earlier article about the HoF, it gave me pause for thought to see that, if anything, I’m wary of heavy metal getting into the hall of fame, rather than angry or apathetic.

I can understand why some get angry that, once again, bands like Motörhead are overlooked for induction into the HoF, and denied the recognition and kudos that are afforded to inductees. That the hall continually snubs a large and vibrant section of the rock scene is often met with derision and irritation from fans who believe the HoF continues to ostracize those who lived and breathed the rock ‘n’ roll spirit, like Lemmy, in favour of artists like Duran Duran, whose only rock spirit may have been found in their debauched, excessive lifestyle. Everybody wants validation, to see their favourite artists get the recognition they deserve and for a genre that often plays a big part in people’s lives (from slowly building up your battle jackets, to those conversations that yes, I am listening to a band called Cattle Decapitation while wearing a Mortician T-shirt and yes, I do not think that it is pure noise).

However, I do have to caution metalheads who want to see metal in the HoF with these oft-said words: be careful what you wish for. Heavy metal getting into the HoF may not be the victory you think it will be; in fact, rather than ending the argument as to whether the genre belongs in the HoF to begin with, it’s likely only to evolve into several subsequent arguments that will perpetuate a familiar feeling of ill will similar to that which the continued snubs foster.

Sure, there are several bands that the majority of metalheads can coalesce around, primarily vanguard acts such as Judas Priest (who are, as of this year, one of the few metal bands that have actually been inducted). However, when you consider the broad definition of what constitutes “rock ‘n’ roll” in the eyes of the powers that be in the HoF, those metal artists who are deemed worthy are unlikely to be in harmony with the beliefs of the metalhead community. What happens when a more divisive candidate is inducted before bands with wider adulation? The reaction among metalheads as to why Poison make it in before a Faith No More or Bathory could shift the debate from ‘why does the HoF not recognize metal’ to ‘why the HoF does not see metal through the same eyes that we in the community do’.

Further to this, the issue of commerciality rears its ugly head and the metal community’s awkward relationship with the mainstream comes into frame. Metal often revels in its outsider status, celebrating the fact it exists away from the spotlight of the mainstream media and transitory fandoms that oft constitute the audience for pop acts that rise and fall quicker than Norwich in the Premier League. This is at odds with the apparent criteria that the HoF utilizes when drawing up a list of candidate acts each year, with the relatively poor sales for metal acts in the short term reflecting badly against non-metal acts, even if metal acts often sustain far longer careers. This would mean only those acts who have managed to breach the mainstream and maintain their metal genre tags will be selected over influential acts; can you honestly say you’d be happy see Avenged Sevenfold fly the metal flag over a Death or Napalm Death? Sure, the HoF does induct a few non-commercially successful artists (with exception to artists pre-1960s, when the music industry as we know it had yet to take shape), but these inductees are often the exception to the rule (The Ramones being the only one that immediately springs to mind). That this would happen consistently enough for several highly regarded acts in metal to get in is highly unlikely.

This leads into what I would call the Red Hot Chili Pepper (RHCP) effect, whereby the HoF/mainstream adulation for an act is reserved for the material that is probably the most diluted form of metal that band offers. When the RHCP were inducted, do you think it was to celebrate their earlier material like “Fight Like A Brave”, or more for their later material like “Can’t Stop”? Sure, their whole career is inducted and not merely select parts, but which period in the careers of inductees do you think will be reserved for the most veneration in their eyes? Do you think The Jester Race or Reroute To Remain for In Flames would be the celebrated album in the eyes of HoF judges (or even Siren Charms *shudder*)?

All in all, it boils down to a question of trust: do you trust the HoF with representing and celebrating metal with the same level of adulation and respect as those in the metal community? The fact it has taken this long for Judas Priest to get in (and through the side door at that), I have little faith in the HoF going forward, so I find it’s better to forget about it and just enjoy the music and support those artists the best way I can: by spreading the word, attending shows and buying merch. Save your thoughts and feelings for more relevant and representative institutions that share your feelings towards metal (maybe even vote in the Metal Storm Awards next year, says the person whose pick for albums of the year rarely win, all I can say is you’re all wrong) and celebrate with those likeminded individuals who make up the metal community instead.

Who needs the Kwik-E Mart, I mean, HoF? Not me.

Written on 26.06.2022 by
omne metallum
Just because I don't care doesn't mean I'm not listening.
More articles by omne metallum ››