Wow! I'm really excited! On 19/7 I went to my first concert in Athens. It was really a great thing and the presence of the particular legendary bands made it even more special for me. It was the second year that the Scorpions were coming to Greece and had a show in the same stadium. And again the crowds were there to hail them again.

The show was scheduled on Thursday 19 of July, at 21:00 in "Karaiskaki Stadium" in Piraeus, Greece. Like I said, it was the second year in the row that the Scorpions visited Greece but this time with a Special Guest, the amazing hard-rock band Whitesnake. The gates opened at 18:00 and the crowds started already coming in. Even the underground train station was full of rock fans, waiting to get in a train to attend the concert. Although this summer many famous bands visited Greece, the fans were still excited and anxious about this concert. The same two bands visited the other day Thessalonica (second biggest city) and had a concert there too. So these two days, all rock/metal fans across Greece were split in two groups - north people and south people of the country, both excited about these shows. So that was in general lines, the atmosphere here, these last moments before the shows.

Back in Athens now, like I said, the gates opened at 18:00 and from that time people from all south territories started flowing to the "hot" point. At the moment I reached the stadium at 19:45, at least 10,000 fans were inside. As time was going by, even more fans kept coming in, so when the show started, the seats and the field were full of more than 30,000 fans leering for rock!

The opening act was made by a band called "Godiva" which took on the role of warming up the crowds for the upcoming event. Although this band existed since 2001, I have to admit I wasn't aware of it and its songs, like most of the people inside and outside the stadium. However, it accomplished its task very well in making the hardcore fans under the stage cheer them to death! They performed some songs from their new album "Call me under 666" and they had a great welcome from the crowd.

That's how things were till 21:30 when Whitesnake entered the stage and finally the show began! From that moment and for the next one hour, the fans were under the influence of their magic sound. David Coverdale even at his age, still has that charming voice that used to make people and especially women melt down at his feet in the 80's! He amazed us all by his performance and his capabilities. The band performed older and newer hits, like "Is This Love," "Fool For Your Loving," "Here I Go Again," "Still Of The Night," "Ain't Gonna Cry No More," and many more great songs. The band's performance was excellent and the crowd recognized that, both during and after they finished singing. But here I have a complaint, they only were up on the stage for one hour! We all wanted to watch them longer, but… the Scorpions were coming up next!

At 22:45, after a small break that stage needed to transform from a Whitesnake platform to a Scorpions arena! Klaus Meine and his legendary rock band appeared on the stage under the sounds of Berlin's Philharmonic Hurricane 2000 intro! An amazing entrance for a magnificent band. After a short welcome, referring to the anniversary of 35 years of rock and their amazing last year's show, the Scorpions started their musical banquet under the crowd's cheering! The Scorpions performed many songs of the past including classic hits as "Blackout," "The Zoo," "No One Like You," "Make It Real," "Big City Nights," and some from their latest album "Unbreakable." But what touched me more, was the well-known and outstanding phenomenon of people holding their lighters up at the song "Wind Of Change." That experience was something I've never lived before 20,000 and more people, holding their lighters… Even the canteens in the field, turned the lights of the fridges off, so they didn't spoil the atmosphere… It was something I can't describe in these lines, something you have to live to understand!

But the time was passing by and the Scorpions hadn't sung some songs like "Send Me An Angel" or "Rock You Like A Hurricane" when they stopped and left the stage! But everybody understood it was one of their jokes and starting yelling "One more!" and eventually they did came up again to sing their last song. And that song couldn't be else than the one and only… Rock You Like A Hurricane!!! People stood up (those who were still sitting) and all together started singing with the band "Here I am, Rock you like a Hurricane…"!!! And that was the end of the story… Scorpions finished their amazing show and said "Goodnight Everyone" and left the stage, leaving all these people standing there in ecstasy for all those they just lived!

Ooooh! That thing was something like… something I can't describe! If you haven't gone to a concert yet, DON'T waste any time! Grab a ticket for the next concert that will happen close to you and go! Don't miss that chance!


P.S. Sorry if the pics are blurry... I couldn't stop my hands from shaking! 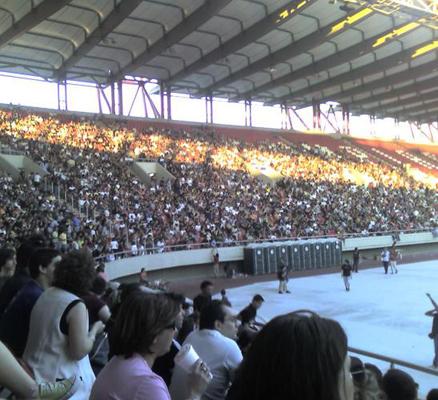 When I entered the stadium people was already there 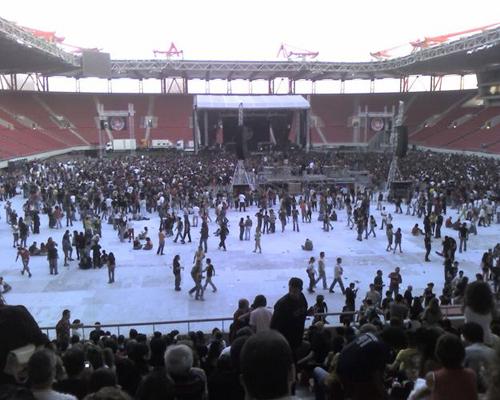 Time was passing by and people kept coming 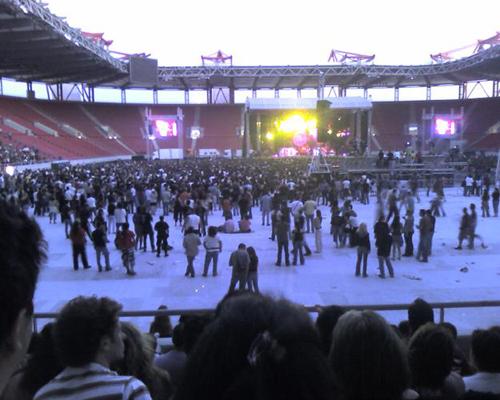 Godiva on the stage! 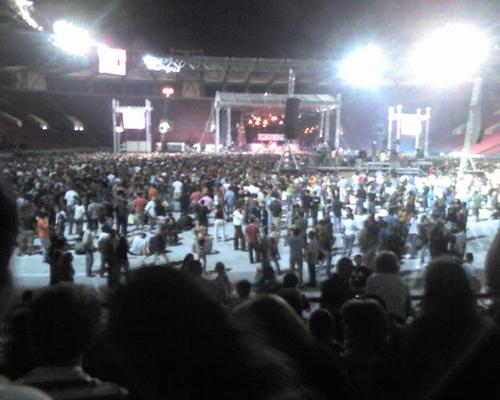 Sometime when Scorpions were up!