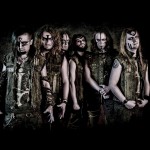 - Hi guys, Jeff of Metal Storm is here !!! So let's start this interview with the traditional introductive question: can you present the band to the ones who still don't know Elvenking?


Well, the band was formed back in 1997 by myself and former guitar player Jarpen. In 1998 the band was completed with the addition of singer Damnagoras and Zender on drums. We recorded our one and only demo "To oak woods bestowed" in 2000 with Damnagoras in the double role of singer and bass player. Few days later we had the first companies and decided to sign with AFM records. In 2001 we recorded our debut album "Heathenreel" with new bass player Gorlan. We recorded our second album "Wyrd" with new member Elyghen on violin and keys and a different singer Kleid. Our last album "The winter wake" see the return of Damnagoras and the leaving of Jarpen.


- It's not always easy to put a label on the bands so how do you describe your music? And why did you choose to play this "original" Metal?

It's really difficult to define the band's sound. Lots use to call us folk metal, but we don't agree completely with this. Sure the folk influence is there and you can clearly hear it but thinking about it not knowing the band I would expect a band turning the traditional folkloristic jigs into metal with electric guitars and fast drums as lots of band do, while I think that we are completely different. I mean, we have our own personal style before all. Our goal is creating emotions and feelings through our music, and we use different approaches to reach this.


- A lot of bands play Folk Metal nowadays. In reason of its originality, do you think that it is the future of the Metal music?

Well, when we started doing this music back in 1997 this kind of stuff was really unique and fresh. But as you said nowadays there are a good number of bands mixing metal with folkloristic tunes, especially in the extreme scene. This is why in our last album "The winter wake" there are some songs pretty different, as the title track or "Rouse your dream", since we want to keep our sound as fresh and personal as possible. And this is also why in the album there are less death vocals than in our previous albums: when we did it back in 2000 it could sound new, now how bands are doing this? 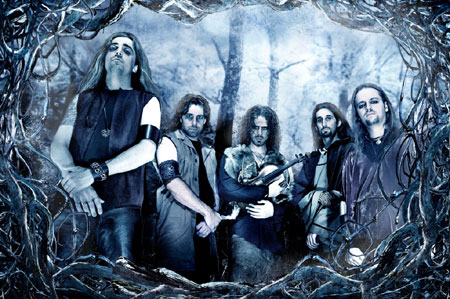 - Now, let's talk a bit about your new album "The Winter Wake". What are the topics of the lyrics of your new release, where do you find your inspiration? Is it only some epic stories or do you have also a message for your audience?

The lyrics of "The winter wake" cover different arguments and topics but we can find a common argument in "escaping from reality" I'd say. A lot of people think that all our lyrics are fantasy stories but this is not true at all; just few of them are related to fantasy themes and every time just using this as a metaphor to cover deeper meanings.


- What are the principal differences between your first album, and the music of the new one?

Well for sure "The winter wake" is a strong step forward for the band. I would define our debut album a little bit "immature". You could easily see a young band playing there, with tons of ideas floating in one single song. For sure the last album songs are more difficult to write 'cause you need to find the right way straight. Nowadays we have really grown up as songwriter and the level of "The winter wake" songs is really steps ahead. 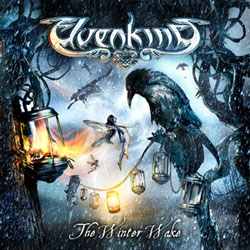 - How Elvenking works during the process of writing and recording of a new album? Are you some really serious and professional guys… or are you always ready to joke, watch football and drink a beer with your mates of the band because it's also fun to do music in addition to be a passion?

If you mean in the process of writing and recording I can say we're really serious and professional. The most serious process is usually the songwriting phase. In this one we're really focused on the things we're doing. When we rehearse for live gigs and when we're simply together we're most relaxed and the atmosphere is usually easy, and often we go down to jokes and stupid things. There are a couple of band members (especially one) who use to do a lot of funny things and keep the atmosphere easy all the time!


- Some bands like Orphaned Land use Oriental influences same with Cruachan with Celtic music so is it possible to see one day some traditional "Italian music" in your compositions? And if yes, how could it sound? (Sorry guys I don't know a lot about traditional music from Italy so maybe that this question will be a bit weird for you but on the other hand, I'm from the south of France and lately we got Hantaoma that plays Metal mixed with music from Occitany… so everything is probably possible lol )

Well, no I don't think so. You can already find some little Italian influence here and there in our songs, but I don't think there will be more than this in the future. And by the way the folk touch you hear in our music is already coming form the folkloristic traditions of the Alps near where we live.

- A lot of people agree to say that your last album is your best one. Musically speaking, do you think that you reach the peak of your career or do you still have some new ideas in mind to "improve" your music in the future (for example with some new folk instruments etc…)?

I totally agree with the fact that our new album is our best one so far. When you come out with a good album as "The winter wake" you're always a bit worried about the next one, about the new material, etc. In these days we're working on some new ideas for the new album; they're just starting ideas but I can say that they sounds really promising. The fact is that album by album Elvenking music is pretty different, we don't copy ourselves so as "The winter wake" was different from "Wyrd" as it was different from "Heathenreel" I think that the new album will contain some fresh music as well.


- I've never see you live but I really hope that I will have this luck one day. How is a show of Elvenking? I'm sure that it's really powerful and dynamic. Am I wrong?

I guess you're right!

For sure is something particular. But I think I'm not the right one to judge this. Hope you can see us live soon.


- I know that you'll do some festivals this summer. What are your feelings about all those festivals? Do you have a favourite one? Do you dream to play one day at Wacken, Graspop for example?

We are just back from the European tour supporting Jon Oliva's Pain, and we played some very good festivals as well, in Germany and Belgium for example. For sure the ones you have named are really good ones so hope to play there sooner or later! 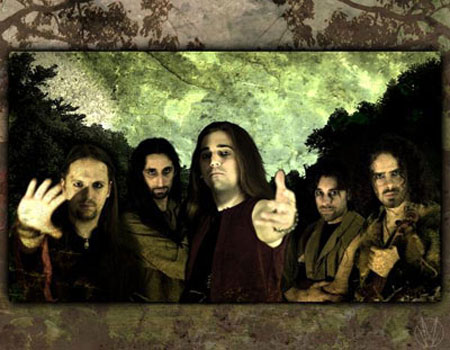 - There is a lot of Metalalheads in Italy if I'm not wrong. Also, the Metal scene of your country is bigger and bigger each day, and finds a lot of success all around the world now. What are the reasons of this success?

Yep, there are but the big problems in Italy is that the Italian bands are not well seen. The Italian scene is not supported by the Italian promoters for example, and this is a pity. That's why we have more success abroad, even if it can seem strange.


- Thank a lot for your time and for this interview, your fans from all over the world will read it, so if you have a message…

Thanks a lot to you for the interview. Hope that you have appreciated "The winter wake" and hope to see you all in some live gigs around! May the winds blow fair at your backs…


Many thx to Aydan and Elvenking and to Jerome @ Underclass Music