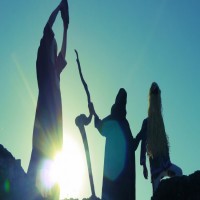 One of the greatest discoveries I've made in the past few years would have to be the massive drone doom of the Spanish Pylar. Shamanic, hypnotizing, and featuring a wide variety of nonmetal instrumentation, after being impressed with recent releases from the group, I managed to get ahold of guitarist Bar-Gal, who helped peel back the curtain a little on the mysterious group.

Che: Thank you very much for taking your time out for this interview today. Let's start with the basics. Pylar are a relatively obscure, secretive band, so your origin story should be interesting. When and how did you guys really get started?

Bar-Gal: We like to keep certain things hidden so they have more power. Pylar emerged in the deepest of our minds. It took several years to materialize on this plane. There were certain rituals related to the change of era and shortly after we were able to invoke the forces that lie behind Pylar. Sometimes I do not know who or how many we are. I can only tell you that Pylar is multiple and that among its members there are entities that are not in this plane of reality.

Che: Another band I've seen some people mention here and there in relation to Pylar is Orthodox. What is the connection between the two, if any?

Bar-Gal: Yes, some of us were part of Orthodox, and others were part of Blooming Latigo, but in Pylar we have all been reborn under a new name. Orthodox and Blooming Latigo were and continue to be a great influence for us and we share with them a musical vision to push metal beyond its borders into unknown territories.

Che: Pylar conjures a very grandiose, theatrical sound that's ultimately a blend of many different influences. Listening to you guys, I hear bits of doom metal, drone, jazz, orchestral music, and folk all going into the final sound. Do individual members have prior backgrounds in these genres?

Bar-Gal: Technical skills are important because we are like blacksmiths who want to change metal's shape, and to do that you have to know the secret arts of your craft. Each one of us has different qualities and backgrounds. The union of all of this is what shapes the sound of Pylar, as you say. When we started creating music together the only premise was, as Randolph Carter did, to go where no one would have gone before. To explore regions where you can contemplate the beauty of sounds that have never been heard. One of the mechanisms we used was to study the fundamentals of various styles and see how they could be conjured under the powerful mantle of metal. We have stolen ideas from all those styles that you quote but the main source of inspiration is still heavy metal, specifically those bands that reached their essence, either through purity or corruption. Solve et coagula.

Che: How does your songwriting typically proceed? Is it a group effort, or does one individual have chief control?

Bar-Gal: If you see the credits included in the artwork of our albums you can see that it´s a common effort. A song can vary a lot from the first time it is invoked until it takes the form you hear on the disc. There is a complex process of listening and reinterpretation, of searching, until we find what we had in mind.

Che: Is your music at all improvised?

Bar-Gal: Improvisation is an essential part of our compositional process. There are mother ideas from which we start and structures that we create to handle the form that sound adopts while we play, but we always let the forces possess us and chance comes into play. Chance is a very powerful force, and it is the only way to get there where the rational mind cannot because of an excess of analysis. So the themes begin to change and adopt changing forms. Our songs are living entities that in one way or another change each time they are performed.

Che: Do you all ever use any audio samples at any point, or is every sound we hear on album actually coming from a recorded studio musician?
Bar-Gal: Everything you hear has been recorded by us. We have nothing against the use of samples but we have not needed them yet. 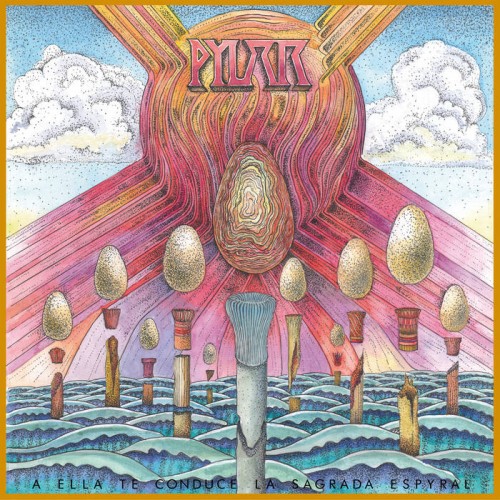 Che: You all really seem to do something different with each album, each sort of following in line with a common aesthetic but nonetheless having its own distinct identity as well. For your latest album, A Ella Te Conduce La Sagrada Espyral, what were you all really going for there? Where do you think it sits in relation to the other Pylar albums?

Bar-Gal: All of Pylar's albums are closely related to each other. You can travel from one to another through innumerable paths that exist between them. Although the topics dealt with are very varied, we always approach them with a very clear, dominant aesthetic. Pylar are heirs of the Old Tradition. We have invoked forces that had been dormant for a long time. We are here to open doors to other planes of existence, since the one we perceive is not the only one. Each Pylar album is an object of power, an artifact that functions as a threshold that allows you to access regions of your mind that our world has buried so deep that we have forgotten that they existed. Listen and remember.

With our new album, "A ella te conduce la sagrada espyral" ("To her it leads you the sacred spyral"), we wanted to translate the Neolithic cosmogony into sounds. Neolithic is a historical period that obsesses us and is where the foundations of our being are hidden. There the Mother Goddess dwelt, mother nature. We tell how everything arose from the original chaos, the primordial waters, and how the Goddes adopts different hierophanies to create everything that exists, including time. The spiral is the key that allows us to find our way back to the great mother, regresum ad uterum. 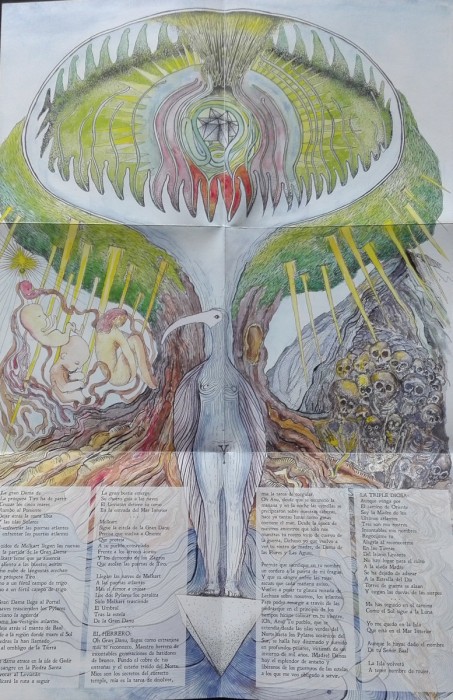 Che: Let's talk about the thematic inspiration behind Pylar, as this is something that seems to reflect deeply in the band's visual department. One needs to only glance through some of the artwork for your albums to see many allusions to shamanism, ancient religion, things of that nature. Would you care to elaborate on this influence and how it factors into the music?

Bar-Gal: There are many extramusical elements that have inspired and helped us give shape to the sound of Pylar. Many readings of authors that we admire, such as Marija Gimbutas, Robert Graves, Lovecraft, Alan Moore, Julian Cope, Marius Schneider, Herman Melville or Oswald Spengler (praised be three times). All of them have guided us through long forgotten paths to recreate the fascinating and complex world of ancient cultures. But we must add the importance we give to the dream plane. Gamaheo, our drummer, is the one who usually takes care of the visual aspect of our records and among his favorites are Magritte and Moebius.

Che: When and why did you all choose to use Spanish for your lyrics?

Bar-Gal: The emergence of Spanish as an idiom is framed within the birth of vernacular languages in Europe around the year 1000. The emergence of these languages was due to very profound causes and it involved a confrontation with the language used by Christianity to dominate the minds of the inhabitants of Europe: Latin. Through the powerful spell that was the Gregorian Chant and the sacred scriptures, Latin was the only way to access the divine and was used to erase the knowledge of the polytheist cultures that preceded the Christian era. In those "new" languages the remains of those ancient cultures were hidden and we use them together with unknown alphabets that are revealed to us through irrational means. This is very important, because your way of speaking determines your way of thinking, the way you see the world, the way you perceive reality. Latin can only take you to a patriarchal god. We sing to the mother, and we have to use what is hidden from her ancestral voice.

Che: Do you feel as though the landscape or history of Spain influences the music of Pylar?

Bar-Gal: From the beginning, psychogeography was something important for us. Every musician (if we see art as a form of shamanism, a form of magic that alters reality) must interact with the forces that surrounds him or her. In the Iberian Peninsula inhabited many civilizations we have forgotten today. We want to bend time (leaving behind the history linear logic) to re-invoke forces that lay dormant, that slept powerful buried in the sands of existence. The megalithic culture that developed in our region a long time ago has been one of the most powerful sources that inspired our music. For us it is essential that musicians interpret what propitiatory music would be as a way to fight against linear time and all that it entails: patriarchy, states, hierarchy, religion, monotheism...

Che: I notice that Pylar perform live here and there now as well. How have these shows been going so far, both for you all and for those in attendance?

Bar-Gal: We have had excellent reactions from specialized media, that usually emphasize the originality of the staging and music, as well as the atmosphere that surrounds our rituals. Mantras and repetitions, the use of vibration, has a clear curative intention in the sense that the music you listen to allows you to enter into a trance and escape from the superficial reality that surrounds us.

Che: Do you think Pylar would ever play outside of Spain?

Bar-Gal: We hope so. There have been several offers to play at European festivals, but for some reasons we have not yet been able to do so.

Che: What other artists would you all consider touring with?

Bar-Gal: We would love to support Deathspell Omega, but they don´t play live. If I let myself go, I would say that we would like to play with Manowar. Or having supported Neurosis in the "Through silver and blood" tour, or Frank Zappa in the eighties, or King Crimson right now.

Che: What's next for Pylar from here?

Bar-Gal: We are working on two new albums that will take our music to another level. There are many more stories to tell and many forces to invoke.

Metal Storm greatly thanks Bar-Gal for his contribution, and eagerly anticipates the arrival of more stories from Pylar.
In the meantime, you can always check out their current releases over here. All hail to these shamanic songsmiths, 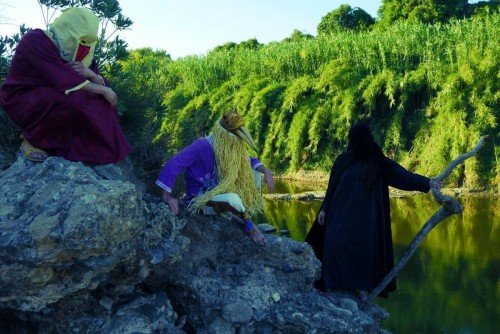 Posted on 26.11.2017 by
Apothecary
Comforting the disturbed and disturbing the comfortable since 2013.
More interviews by Apothecary ››