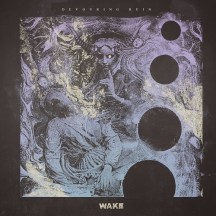 
Wake may have started as a grindcore band but they have been expanding their sound with every release to the point where, on Devouring Ruin, the grind element is far from being the dominant one on display.

Things had already started to seriously move away from the 'strictly grindcore' tag since 2018's Misery Rites (have you listened to "Burial Ground"?) but with this one Wake manifest a blackened death metal approach that at times even pulls into the realm of tech-death brutality. What is even more striking is their talent to weave delicate threads of melody into the sturdy black/death framework and one of the great strengths of this album is how melodic it is at times. This fascinating contrast is palpable during the last two minutes of "Mouth Of Abolition", and also in the atmospheric segments of "This Abyssal Plain" that allow breathing room for the deathgrind intensity of the rest of the song. On the same note, another surprising feature is the inclusion of a slow and mood-setting intro and also of a couple of instrumental interludes in between the main tracks that create a certain antithesis to the chaotic blasting, as well as anticipation for what will follow.

Aside from the two aforementioned tracks, the ones that stand out for me are "Torchbearer" and "The Procession (Death March To Eternity)". While the former blends death doom heaviness with atmospheric black metal soundscapes, some chuggy groove and dissonant death metal, the latter is a progressive beast boasting excellent riffage and inventive drumming that builds up to a dramatic crescendo which closes both the song and the album.

In a way, Devouring Ruin marks a similarly important shift in sound for Wake to the one that Cattle Decapitation and Full Of Hell attempted last year; pure grindcore will only get you so far. And, to me, this album is superior to both Death Atlas and Weeping Choir, and comparably ambitious to Ulcerate's latest release. In around 45 minutes of runtime it comes across as a fairly expansive and modern death metal record that touches on various extreme styles with great success. It's not a unique sound but it is certainly unexpected for a formerly grindcore band to have evolved so much that their longer compositions are now their most riveting ones.