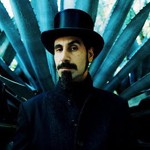 Serj Tankian had just released an EP last year, Elasticity, as well as a detour with the Disarming Time: A Modern Piano Concerto EP, so EPs seem to now be the System Of A Down singer's new modus operandi, since now there's an upcoming one too, named Perplex Cities, due October 21 via Serjical Strike.

Serj explains the concept behind the release: "This whole collection of songs within Perplex Cities is a completely different sound than what I’ve done before. More electronic, subtle and deeper in terms of its layers of presentation musically. Perplex Cities gives off an aura that is unique and unlike my previous releases... I’m always trying to create new and interesting ways to connect with people via my music. We made some amazing videos for the last EP Elasticity, so I wanted to try something different for Perplex Cities. I love the idea of appearing in the room with someone listening to my music. It’s intimate, fun, and different."

Switching up the usual releasing status quo, Serj will release a new track weekly on an augmented reality app called Arloopa. A first song named "Pop Imperialism" is already available, and a tutorial to how to access it can be seen below: