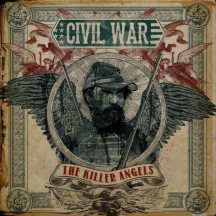 
Aaah, finally a new Sabaton release. Honestly, I wasn't expecting it so soon, just an year after their sixth effort, Carolus Rex. And, by the way, I'd suggest Joakim to take a little break, his voice is unrecognizable, seems like he's singing while someone is squeezing his balls. But the other band trademarks are all here; it's clearly Sabaton.

What? Is this not Sabaton? Civil War, that's what the album cover states. Let's check it out. Oh, here it is, I've cracked the conundrum. Four out of six members of Civil War are ex-Sabaton, and left just after the recordings for Carolus Rex. They recruited veteran singer Nils Patrik Johansson (Astral Doors, Wuthering Heights) and death metal bassist Stefan "Pizza" Eriksson and, while Sabaton was touring all around the world, got straight to work, and released their first self-titled EP in November 2012.

So, despite the fact that every musician in this band is no longer a rookie, The Killer Angels has to be considered a debut. And, to be true, it's one hell of a debut. But, although the composer of Sabaton's music is always been Joakim, the Civil War guys couldn't avoid having a heavy inheritance from their previous experiences, and The Killer Angels sounds pretty much like a Sabaton-clone.

But there are some substantial differences between the new bands. Luckily, the ex-Sabaton guys had the reasonableness of choosing a singer whose vocal timbre doesn't recall Joakim's, putting some distance between the two bands. Nils delivers indeed a great performance, characterized by a harsh voice, like a midpoint between screaming and clean singing, providing both anger and camaraderie ("Saint Patrick's Day").

Another distinction between the two bands is the different approaches the two have to the same kind of music, made of chasing verses, strong bridges, and easily singable choruses, ideal for live performance. In fact, Civil War music seems more rough, authentic and in a certain way more "primitive" than the one of their more famous colleagues. Every instrument seems played with more rage: The Killer Angels, though lacks the usual, pompous, dramatic Sabaton slow ballads, is undoubtedly heavier than every work from Primo Victoria onwards. More metal.

I just can't imagine the guys in Civil War in front of a computer, with a cup of coffee, mixing their albums. I like to think of them in a small, smoky garage with some microphones, recording a track, drinking some beer, having fun, and recording again.

These last two years have seen the birth of famous rivalries: some friendly, as the one between the two Rhapsod(ies), other spiced with dramas and insults, as the one that divides the two Queensrÿche(s). Knowing the usual atmosphere that's always been inside the original band, I guess - and sincerely hope - that the one between Sabaton and Civil War will be a constructive and damn stimulant dualism.

Written on 12.06.2013 by
R Lewis
Hopefully you won't agree with me, diversity of opinions is what makes metal so beautiful and varied.