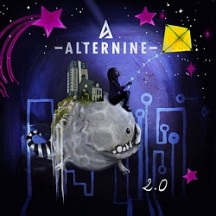 
When I hear a band's sound for the first time, I always try to figure out what to do while listening to that particular kind of tune, and this time it has been really difficult. Alternine's music, in fact, is not made for moshing or headbanging, nor for a relaxing booze, neither for gloomy situations or romantic nights. It seems their music is made just to be enjoyed.

Alternine belong to the rapidly emerging crowd of bands that are renewing alternative metal, mixing this already variegated genre with melodic rock and almost pop melodies. But, unlike many other bands in this genre, the French combo isn't absolutely prolific, being 2.0 is only their second EP, subsequent to 2008's Alternine. This is also due to the frequent line-up changes.

The band, however, surely has arrows in their quiver to conquer the listener's favor with their total 37 minutes of music released in their eight years of activity. The first feature that catches the ear is singer Laetitia Jéhanno. With her very own positively cheeky, sometimes provocative vocal timbre, she is light years ahead of the classic female singer stereotype. But the band isn't all there yet.
Alternine shows how having a talented singer doesn't necessarily mean disregarding the music, which in fact, is plainly satisfying. Don't expect furious drumming or highly technical solos though. The band, dusting off some indie tricks, sacrificed the individualities on the altar of a well-balanced atmospheric music, varying from dreamlike melodies to fizzy sci-fi tunes, sometimes resembling the style of bands such as Fair To Midland.

It's really difficult to value just 20 minutes of music, but with these little teasers, Alternine display a talent that should be hatched and trusted. Stay tuned for the third demo in 2018.

Written on 10.09.2013 by
R Lewis
Hopefully you won't agree with me, diversity of opinions is what makes metal so beautiful and varied.