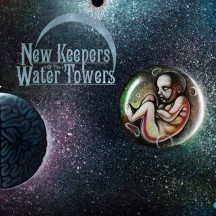 
There was once a stoner metal band that desired to take their music to new horizons. By "once" I mean this year and by "new horizons" I mean if you're after something refreshingly different then look no further, for Cosmic Child was born!

Sweden's New Keepers Of The Water Towers are making progressive movements with their sound of a smooth blend of stoner doom metal. Where are they headed, and what is their trajectory? Space, avid listener, space. It's all on up from here because this is one hell of a trip to the stars and back, if you're so inclined.

Interesting band name isn't it? I haven't got the foggiest idea what it means but it's interesting nonetheless. Yet it isn't half as interesting as the kind of metal they play. With apparent ease this outfit merges stoner and doom metal in such a way that I'm thoroughly convinced that their sound is out of this world, and given that they've entitled their second album Cosmic Child, I think that's where they're assuredly going with their sound.

So what does it sound like? Well, I imagine it as something sounding like the love child of Mastodon and Pink Floyd; think Hearts Alive meets Shine On You Crazy Diamond, respectively, and you're not too far from the band's point of inspirational origin. Mind you this is only an inspiration point; as their expansive sound envelops a metal niche all of its own.

To describe an album as both breezy and heavy might seem like a contradiction at first but bear with me as it really works wonders in the approach of Cosmic Child. There are moments of a thunderous gallop embedded in this expansive set of stoner metal melodies, drawn out as they are and studded with the impressionable weight of heavy and doomy riffs, just to fix your feet to earth lest you drift too far off into the album's peaceful acoustic spaces.

Its drawn-out nature gives it ample scope for the tunes to expand and its melodic passages pass by with as much fascination as a comet trail. It's the perfect kind of listen to chill out to, as it makes few demands of the listener as they are comfortably placed in a cosy environment of steadily unfolding cohesion of stoner metal, doom metal and progressive rock.

The fact that it is quite drawn-out is the only demand it has really; despite the attention to detail there are moments in which the sound thins somewhat, though the clean and varied vocal performance from Rasmus Booberg and the climactic resurgence of melodic riff, such as that of the appropriately titled "Lapse," often manages to bring things together nicely.

That said it's not overly long by any means. It's just a bit long-winded in the extended tracks; two of the tunes are over twelve minutes, giving plenty of time in which the song writing slips into a dip occasionally, but these are generally remedied in due course or go by unnoticed in the grand scheme of things.
The style here is perfectly suited for proggers and doomsters while being atypical of stoner metal, or even stoner doom metal in its thorough excursion into progressive rock.

Whether you're after some stoner metal of astronomical direction or you're a seasoned space rocker looking for something heavier than the usual fare, then this is an album not to be missed.