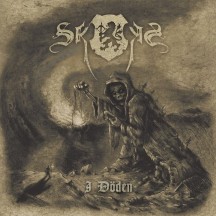 
It seems like yesterday (it wasn't) when Skogen released Svítjod and I sat at my computer desk typing up a review starting out with how much these guys have flown under the radar in spite of creating some excellent atmospheric/pagan black metal. Today I will start out doing the same.

This Swedish trio have a knack for songwriting. They don't indulge themselves too much even though most of their songs surpass the 7-minute mark, and they don't get too caught up with "trying" to build up a dark atmosphere. The fluid transition from beginning to end is about as natural as it gets, comparable to The Mantle by Agalloch. There are moments when you expect an acoustic breakdown or a blastbeat assault that never happens, but that's a minor fault in the grand scheme of things and doesn't take away from the overall quality of the album.

Words like "beautiful" and "epic" are often overused and thrown around when it comes to describing this kind of atmospheric metal, but I döden does its best to earn those compliments with some grandiose leads and melancholic backing choir-esque chants, not dissimilar to what they've done in the past. It's difficult to say whether or not this is the best Skogen release thus far, considering their sound has only been tampered with on a minuscule level, but it's certainly another quality album to add to the band's expanding discography.

Skogen have done a great job staying the course while also evolving their sound slightly, or at least while carving out their niche in the metal scene. This is far from the most original release you'll ever listen to, but I döden still retains the "beautiful" and "epic" qualities of its predecessors, taking the listener on an hour-long journey of mid-paced keyboard-laden dream-like atmospheric black metal. In other words, it's an easily digestible album that should please fans of Wodensthrone, Fen, and the legion of Cascadian and/or pagan black metal bands.