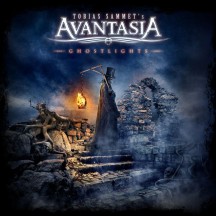 
Over the last few albums, Avantasia have softened and smoothed out - matured, perhaps - and they arrive in Ghostlights a much different beast from the brash power project born the better part of two decades ago. Modern Avantasia sounds more "symphonic rock musical" than "metal opera." No harm done, though - it's only different, not worse.

"Mystery Of A Blood Red Rose" immediately delivers one of the most noticeable aspects of Ghostlights - Tobias sounds nearly unrecognizable at first glance. His voice has deepened and matured even relative to Avantasia's more recent material; he bears little relation to the Avantasia of The Metal Opera, to say nothing of old Edguy material. Sat in the midst of Avantasia's diminished extravagance and safer compositional choices, Ghostlights, too, in many ways echoes the old-age odysseys of UFO, Europe, or "Seduction Of Decay"'s guest vocalist, Geoff Tate. Tobias has been steadily sanding down his edges and cultivating a much warmer, more mellifluous approach to songwriting of late, and while we no longer have the magnificent dynamics of "The Scarecrow" or the speed and volume of earlier material, I've found these last few albums to be a lot more consistent and generally more enjoyable, even if they aren't capable of reaching the same occasional heights.

In this regard, Ghostlights finds its closest analogue in The Mystery Of Time; for the most part, Ghostlights definitely sounds tamer and friendlier - though also wiser and more benevolent - than a lot of (symphonic and/or) power metal on the market these days. A few tracks, like "Babylon Vampyres" or "Unchain The Light," bust through the walls with a rawer and more raucous metal sound, but the unusually orchestral "Isle Of Evermore" and slow-building epic "Let The Storm Descend Upon You" set the tone more accurately.

It goes without saying, but Ghostlights lives up to its predecessors with its impressive roster of guest musicians, including several new additions to the Avantasian canon. Rarely has there been a better vocal duo than Tobias Sammet and Jørn Lande; these two titans triumphantly thundering out their tales in tandem always bring a smile to my face. Great as The Mystery Of Time was, it did not have a Tobias/Jørn duet, which is obviously essential for any Avantasia album. Throwing Michael Kiske into the mix on the title track only sweetens the deal. With its brilliant rotation of vocalists and inspired guitar work by both Sascha Paeth and Oliver Hartmann, the high-speed anthem "Ghostlights" leaves behind the more static theatricality of metal opera for a daring odyssey into a classic power metal attack. (See also "Unchain The Light" - plus Ronnie Atkins, minus Jørn.)

Overall, Ghostlights presents an Avantasia evolved and refocused; the album is still very much recognizable as Avantasia, however, and no amount of discourse to the contrary ought to be misread as indicative of a serious change in style. Ghostlights grows more slowly than some of their material, but it's very consistent, and, if not stunning, still more than worth its salt.