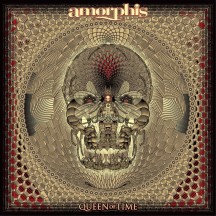 
I love it when an album's intro makes me think I'm about to witness the third season of Ghost in the Shell: Stand Alone Complex. Pardon me for a moment while I lament the lack of any such luck, but what better consolation prize than the new album from Amorphis, a band whose life-affirming elegance has made heavy metal a more fulfilling and artistic genre for nearly three decades now? The years since the turn wrought by Eclipse have pushed Amorphis onto a plane of never-ending acclaim, and Queen Of Time continues developing the rich, many-layered atmosphere that pushed Under The Red Cloud to the tops of everyone's 2015 lists.

Chief among Amorphis's many strengths in songwriting is the maturity of their sound. The blend of light and dark elements, the surge of power without pretension, the crystal-clear melodies, Tomi Joutsen's clarion vocals, the tasteful assimilation of instrumentation and cues from disparate genres - all facets of Amorphis bow towards the light of that which is seemly and beautiful. The complex compositional edifice never nullifies the basic heavy spirit, while the striking guitar riffs and guttural growls never overpower the lush, vivacious melodies; Queen Of Time sounds both fresh and familiar, both serene and electrifying.

Joutsen's folk-singer cleans and the driving rhythms keep the album grounded; the adventurous melodies, whether delivered by flute, saxophone, full orchestra and choir, or conventional lead guitars on an unpredictable streak, bring to Queen Of Time the same inexhaustible wellspring of progressively flavored folk metal, drawing on traditions of the East and West alike, that has fueled much of Amorphis's output this century. "Heart Of The Giant" satisfies the Orphaned Land requirement with its Middle Eastern spirit and energetic groove, followed by the distinctly Finnish "We Accursed"; the repeating riff in "Daughter Of Hate," the flutes of "Message In The Amber," and the lofty chorus of "The Bee" are catchy enough to stick in my head even when I've forgotten my own name.

"Amongst Stars," with its demulcent array of flutes and whistles and the eternally effervescent Anneke van Giersbergen providing guest vocals, makes a strong case for being the album's high point, but with "Daughter Of Hate," "The Bee," and "Heart Of The Giant," it's so difficult to choose just one favorite. It's something of a moot point anyway; who in their right mind would skip a single track on an Amorphis album? By and large, it seems that Queen Of Time follows Under The Red Cloud pound-for-pound. Personally, I'd even rate Queen Of Time just a cut above, but this, too, is a moot point; who in their right mind would skip a single album in Amorphis's discography? After a certain point, I mean.

Chrigel Glanzmann's contributions are even stronger than on Under The Red Cloud, and now Jørgen Munkeby joins the roster of guests with his extraordinarily in-demand saxophone, as well as several guest vocalists. This sound will capture the hearts of everyone who has been following Amorphis closely for the last decade; Queen Of Time is merely one more stunning installment in the seemingly endless victory lap these guys have found themselves in. I feel better about my life when I listen to this album.