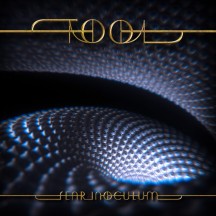 
30/08/2019; a day of huge importance. Finally, after so long, millions of people could at long last stop making the same tired jokes about waiting for the new Tool album.

Even as Wintersun managed to finally release (part of) Time back in 2012, Tool was already held in the esteem as Half-Life 3 and now the next A Song Of Ice And Fire novel. The same quip came up every time any news regarding this album emerged: "I won't believe it's out until I'm holding it in my hands and have listened to it twice". Well, Fear Inoculum, a whole 13 years (or 4,868 days) after 10,000 Days dropped, finally is here, ready to be held and listened to. So, what's the verdict?

Having heard "Descending" and "Invincible" live back in June, I had a suspicion this would lean more towards the lengthier efforts on their two most recent albums, which has now been confirmed. With seven tracks (10 on the digital version, with three brief interludes added), running at just shy of 80-minutes, the only one of these seven not to break the 10-minute barrier is the redundant "Chocolate Chip Trip", an irritating electronics/drums interlude that leaves me longing for a time when Tool used German egg recipes to break up their tracklists. Aside from that, you have 6 songs that together last around 75 minutes. That alone is a pretty firm indication of the direction Tool have taken on Fear Inoculum - there's no shorter, hookier tracks such as "Stinkfist" or "Schism" to contrast the lengthy, brooding epics. 'Excessive' clearly wasn't a word oft-spoken during the Fear Inoculum writing process.

The trend towards increased length isn't the only thing this album takes from Lateralus and 10,000 Days; there's a number of sonic overlaps between those two efforts and this latest magnum opus. The title track, right out of the gate, exhibits a substantial resemblance to "Reflection" from Lateralus, with its tom-dominated drum pattern, elliptical bassline and patient build-up, whereas "Pneuma" inspired thoughts of "The Patient" with a prominent heavy riff and "Right In Two" with its percussive midsection. "Patient" is a word that could be applied to many of these songs; the occasional labelling of Tool as a post-metal band has never felt more apt than on this record. The only song to really step up the heaviness early on (or really at all, in terms of old-school aggression) is "7empest", the one track that clearly demonstrates the band reaching back further to the likes of Ænima and Undertow, and perhaps the standout song on Fear Inoculum.

I should state now, if the score didn't give it away, that I like this album a fair amount. The aforementioned "7empest" makes for a strong ending to what is already a rewarding and intriguing journey. Other songs that have really stood out to me are "Pneuma", a song infused with some real passion, particularly in the vocals, and "Descending", which a drumming tour de force that (aside from a detour about 2/3 through) builds and builds in intensity throughout to two separate satisfying climaxes. At the same time, as someone who is aware of the reasons that many people cite for failing to connect with Tool, Fear Inoculum feels like the epitome of everything that said group dislikes about the band. A substantial amount of this album is slow and ponderous; the focus on exclusively long tracks means that the complex-yet-memorable hooks the band have reliably demonstrated themselves capable of on the likes of "Parabola", "Forty-Six And Two" and even longer tracks such as "Lateralus" are in rather short supply here. Combined with the focus on softer, contemplative music in place of aggression, this already leads certain tracks on a bit of an uphill battle to make a really strong impression.

To add to that, as good as many of the climaxes delivered on Fear Inoculum are, after what must be approaching double figures in re-listens, nothing here has really overwhelmed me in the way that the likes of the "Overwhelmed as one would be" part of "Rosetta Stoned", the suffocating sustained monologue at the end of "Lateralus", or "Shine on, forever shine on" in "Jambi" have and still do. And as a result, the impression that Fear Inoculum has left on me is one of admiration and appreciation, but not quite awe. And for me, that's fine; it just depends whether that's fine for anyone who was expecting a linear relationship between the duration between and the quality of releases.

As much as the focus of this review may seem drawn more towards the negative, it's not intended to be a downer of a review; it's just easier to pinpoint what stops this being an amazing album to me, rather than what makes it a great album. Personally, as a fan of Tool, I was not disappointed by Fear Inoculum, and I look forward to continuing to revisit it and further familiarize myself with it. Maybe with time I'll even consider this review to be harsh. That said, when the dust finally has settled, I do not see it overtaking Ænima, Lateralus or 10,000 Days to become their crowning glory.

Written on 02.09.2019 by
musclassia
Hey chief let's talk why not
More reviews by musclassia ››