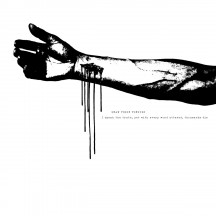 
01. I Speak The Truth, Yet With Every Word Uttered, Thousands Die
02. Purity Coffins
03. White Void Black Wounds
04. To Rival Death In Beauty
05. Here Is No Corruption
06. Abortion Hymn
07. A Sombre Gesture In The Faint Light Of Dusk
08. Shall Be No More


"The world is not doing well at the moment […]" So the explanatory blurb greets me when I look over the promotional materials heralding the latest abomination from Gnaw Their Tongues. This innocent truism comes to us by way of justification for the album's rather dire tone, as if the world smelling of roses would put an end to this nightmare factory.

For now you'll have to leave aside all considerations of whether or not the world has ever truly done well, because from the moment of its entrance this album berates the ears with the incessant buzzing of some swarming insectoid mass, an ugly flurry of straining strings and increasingly desperate synths that covers over the metal-laden skeletons. The opener, which shares that liability of a name with the album, rushes into a mass of screaming tones that resemble the irritating whir of mosquitoes out for blood; "Here Is No Corruption" drops the pitch for a menacing apian buzz that slowly descends into power electronics. "A Sombre Gesture In The Faint Light Of Dusk," aside from a collection of more sickeningly human screams, brings back the culicid mockery of the beginning, but in a much more sinister register.

"To Rival Death In Beauty" lurches in agonizing stupor, a frightful tension maintained by the dual backbone of high-pitched metal grinding and burping low tones. When it reaches such depths, the album rumbles like the contractions of a giant worm vomiting forth bile. I don't know whether worms have bile, or whether they can vomit, or how big the worm is, but we're onto the next song anyway; "Abortion Hymn" is more of a standard noise piece, a four-minute chorus of clanging metal and distorted screams that absorbs the primitive ferocity of the surrounding tracks, though it is one of the less adventurous compositions on the album.

While the cauldron of harsh effects takes center stage in each song, there is, as always, a significant vocal presence under the hood - usually in the form of Mories's raspy shrieks pushed to the edge of the mix, less frequently spoken selections that echo in the background. The album's jerky percussion and grating layers of antimelody do a lot to create a heavy mood, but adding a dash of the human element goes a long way in selling the disgust and anger that an album with this title should really embody.

Perhaps I'm projecting my own impressions onto the album as a result of the times we're living in, but I Speak The Truth, Yet With Every Word Uttered, Thousands Die feels like a mix of sounds both insectoid and medical; the atmosphere is one of pestilence, infection, and filthy, filthy corporeality. The songs are not melodic, but virulent; they don't end, they scream themselves out. I guess listening to celebrities sing "Imagine" is good enough for the rest of the world, but this isn't a time that screams "happy music!" to me. This is the time that Gnaw Their Tongues was created for.