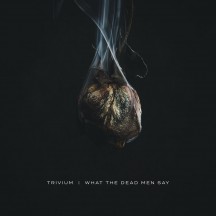 
The Sin And The Sentence got Trivium back on track after the misfire that was Silence In The Snow. What The Dead Men Say doesn't derail the Trivium express, but it's not quite a fulfilment of the promise of its predecessor.

Most people have presumably developed an opinion of one type or another regarding Trivium by now; from their prominent position in the metalcore scene with Ascendancy to the old-school thrash worship of The Crusade, the Floridians were rather divisive in 2000s metal circles, much like many other American bands that exploded at the same time. However, Shogun found more widespread acclaim, following which the band have spent the past decade employing variations of a metalcore/thrash/heavy/alt-metal fusion with varying levels of success. 2015's Silence In The Snow received a fairly lukewarm response, suggesting that the band were on a downward trend; however, The Sin And The Sentence was subjected to a level of enthusiasm that Trivium hadn't received in nearly a decade. As its immediate successor, there is a degree of expectation regarding What The Dead Men Say that hasn't been felt for a new record by the band in a while. To me, it doesn't quite match those expectations; however, that's not to say the album is without merit by any stretch of the imagination.

On the positive side, Alex Bent shows once again what a coup his addition is to Trivium; the title track in particular is a percussive tour de force, with exhilarating fills around every corner, and machine-gun precision to the rapid-fire snare and double bass rolls. Having someone who can so smoothly transition into such frenetic bursts and complex rhythms whilst also maintaining the flow of each song has really elevated the tracks on both The Sin And The Sentence and What The Dead Man Say in a way songs on the likes of Vengeance Falls and Silence In The Snow lacked. The skills of the rest of the band are well-established by now, but Matt Heafy's vocals continue to age like a fine wine, and the solos are regularly exciting, with those on "What The Dead Men Say" and "Catastrophist" excelling in particular.

The album also has a healthy range, from the more overtly melodic cuts such as "Bleed Into Me" and "Scattering The Ashes" to the heavier cuts such as "Sickness Into You" and "Bending The Arc To Fear", with more typical fare such as "Catastrophist" located somewhere between the two extremes. So the band brings the talent and the variety; what's causing What The Dead Men Say to fall short of The Sin And The Sentence? No major flaws, just minor issues that accumulate across the record. With more mainstream metal styles such as Trivium's, an important component is memorability, and I don't think in general the songs here possess the same hookiness that most of the songs on the previous record did. Trivium choruses can be a tad hit and miss, and there's none here that have the pure money factor of something like "Beyond Oblivion". Without those hooks, some of the songs here end up being impressive technical exercises without the necessary ingredient to bring it together; "Amongst The Shadows & The Stones" is probably the biggest victim of this, as it has several interesting components, but the flow between them is quite awkward and the song lacks a clear direction to enable it to become more than the sum of its parts.

The songs on What The Dead Men Say are generally solid, with relatively little in the way of obvious weak links - "Catastrophist" has a nice journey to it, "Scattering The Ashes" is a good vehicle for Heafy's cleaner singing, and "Bending The Arc To Fear" is satisfyingly aggressive and meaty. However, some of these songs easily inspire mental throwbacks to other Trivium songs that arguably pulled off a similar sound more successfully. "The Defiant" is one of my favourite songs here, but it has a similar tone to "Caustic Are The Ties That Bind" from In Waves without delivering the epicness of that track. On top of that, the intro to "The Ones We Leave Behind" naturally draws parallels to "The Sin And The Sentence", the song that kickstarted Trivium's resurgence, without reaching the levels of that track.

Additionally, as far as weak links go, Trivium have generally managed to include commercially-oriented "single" tracks on past records that stand toe-to-toe with the rest of the tracklist; "Strife" and "The Heart From Your Hate" bring every bit as much to their respective records as the heavier cuts. In contrast, whilst it's not "Dying In Your Arms" bad, "Bleed Into Me" is a very forgettable feature on What The Dead Men Say, and its exclusion would have had no negative impact on the record, particularly as "Scattering The Ashes" could convincingly fill the 'short melodic song'-shaped hole it would leave.

Ultimately, What The Dead Men Say is a perfectly fine follow-up to The Sin And The Sentence, with impressive musicianship across the board (but particularly behind the kit) and a generally satisfying tracklist with only one or two duds. I was perhaps hoping for something slightly more consistently exciting after the record that preceded it, but it does enough to maintain Trivium's momentum for the time being.

Written on 26.04.2020 by
musclassia
Hey chief let's talk why not
More reviews by musclassia ››