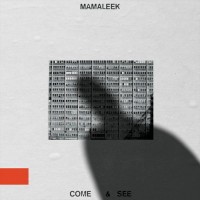 
I have no idea if they have anything to do with each other, but I put off writing a review for Mamaleek's Come & See until I saw Elem Klimov's Come And See.

Having seen that, their names are probably just a coincidence, since there isn't much in this Mamaleek album that talks about WW2 war crimes on the eastern front. I'm not gonna review the movie itself, since our editor-in-chief already did, but I do advise everyone to watch it almost more than I advise everyone to listen to this album. Mamaleek's Come & See does have some tangential bits of similarities mostly in looking at the world's unfairness straight in its face. Most specifically, a weirdly specific theme for an album indeed, it is themed on post-war housing. It didn't go well. I mean... the housing project, not the album.

Mamaleek are a weird band, and anyone mildly familiar with their discography can attest to that. An anonymous duo of supposedly brothers that started their own left-field take on black metal, and slowly stripping away the black metal elements to focus more and more on that avant-garde experimental part. There are still remnants of the black metal sound, particularly in the vocals, that are as full of anger and despair as one loves to hear from a black metal band, but over some experimental jazz/post/blues/punk/rock background that has basically anything tangential to metal except actually metal. Black metal doesn't have a monopoly on despair, and Mamaleek know it, and showcase how each of these genres in different combinations can showcase that feeling of not being in control of your own life, and specifically to this album, how the space you live in emotionally affects you.

The saxophone has become somewhat of a cliche in metal recently, but it is here that it is used clearly as more than just jazz tokenism, completely capturing the ghastly feeling it can evoke in its free jazz form. The saxophone and the vocals may be the most striking elements of Come & See, but the whole album is full of textures and timbres that often feel less outright violent and terrifying but more eerie and creepy, like the promise of violence but without the certainty of it, like living in constant fear. The Odraza album I recently reviewed also had an urban angst feeling, but that felt more like the kind Travis Baker would feel in Taxi Driver, and this one feels more like the flooded houses of Parasite, but with a touch of gang violence.

This whole vibe is achieved without the album ever needing to go into any violent paces, but keeping it mostly in the disquieting. This being the first Mamaleek album to feature a backing band led to the sounds feeling more alive. The jazz influence in the drums that makes it feel like time is always running out, the drowning mix of synths and sax, the blues-like dreadful melodies, to moments that feel taken out of early 90s post-hardcore/noise rock but with a more subdued intensity. All of these seep into the vocals as well, as much as the black metal is still present in those. The despair seems transfixed, like it had learned its misanthropic lessons from black metal, but dove even deeper and escaped that box. What matters is the feeling and the intention.

Written on 08.05.2020 by
RaduP
Doesn't matter that much to me if you agree with me, as long as you checked the album out.
More reviews by RaduP ››