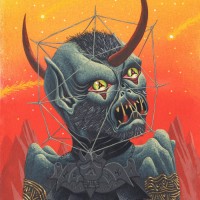 
I am genuinely having a hard time believing this is a one-man band.

But it's true, Esoctrilihum, whose name I constantly have to to copy-paste because I can't for the life of me remember how to spell it, is a French one man black metal band. But this alone shouldn't warrant any disbelief, one man black metal bands are nothing new, and I reckon there's a fair share of French ones as well. But Eternity Of Shaog is so multi-faceted that it is really baffling that every guitar, synth and violin was performed by the same multi-instrumentalist. Not only that, but he's the only one who gets any production credits. He just needs to learn to paint cover arts and do music marketing and he'll no longer need anyone else at all to keep the Esoctrilihum machine going. And I call it a machine because what other band pumps out five full lengths in three years, and each of them both over one hour in runtime and of this high a quality.

I have thoroughly enjoyed every Esoctrilihum I have heard, but I have to admit that Eternity Of Shaog is the one that feels the most complete, and one where what I assume would be this project's vision is most effectively realized. This could vaguely be described as symphonic metal, mostly due to the synths and violins and pianos that play a significant role in this, but never have I heard symphonic elements blended with black metal of such ferocity. And as ferocious as it is, with its suffocating and somewhat psychedelic production, the symphonic element only further enhance the epic and imposing feeling that the album has. This is partly why I was baffled, as I was searching for whoever was performing violin here, expecting to find at least one or two guests. Nope. And it doesn't sound like the violin was half-assed either. Even the entire spectrum of the vocal performances and how they're layered doesn't feel like one person. Even the drums which are probably programmed never feel like they're not given enough attention.

Ok, by now I've probably made the point that this is all performed/produced by one person and it sounds fantastic regardless. And about how the blend of ferocious and epic is what drives this album forward. But it is that album's very melodicity in spite of its imposing presence that makes this such a compelling listen. Not only is it a slight shift of direction from previous Esoctrilihum releases, which were starting to feel a bit stale, but it does so without compromising the essence of what made Esoctrilihum's music great in the first place. Completely unrelated, but goddamn I wish more extreme metal bands could incorporate violins that effectively without sounding melodramatic. Even points where it sounds a bit akin to something like Hecate Enthroned or Summoning never really feel that similar to anything other than its own.

And take a look at the cover art. You probably remember the cover art of the previous Esoctrilihum album, the one that looked like an angel from Neon Genesis Evangelion, and with this one being done by the same artist, a bit of that larger than life feeling is transposed into Eternity Of Shaog as well. Larger than life mostly in a transcendental-deity-in-a-burning-desert way, not in a my-dad-can-pay-my-bail way. There is something very surreal about the way Eternity Of Shaog sounds. I've seen the word psychedelic thrown a lot, even by yours truly, to describe this, but I feel like it slightly misses the mark. It doesn't sound neither psychedelic nor transcendental really as much as it sounds menacing and otherworldly, but not really in a Lovecraftian way either. The monster on the cover art is clearly something you can see and comprehend, but it is still not of this world. And neither is this music. These sound like instruments from out world that you can hear, analyze and comprehend. But it doesn't completely sound like music from our world.

And whenever you thought that this record has already shown you all it has, it either explodes into furious black metal, brings out another instrument, or the same instrument but integrated in a new way, or a new vocal layering, or a production flourish, or a synth line. It just keeps throwing things at you. Even at its relatively long runtime, there really is no room for filler. So not only is the sound and the performance surreal, so is the project's consistency.

Written on 01.06.2020 by
RaduP
Doesn't matter that much to me if you agree with me, as long as you checked the album out.
More reviews by RaduP ››