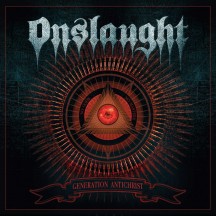 
A new take on the tried and tested formula.

"Rise To Power" is a solid way to start the album, slowly building suspense and anticipation for when that first guitar riff hits and blows away the cobwebs that have built up in your record collection awaiting the follow up to 2013's VI. It does well to also introduce the overarching themes of this album, that is the tumultuous political situation that is 2020 alongside rebellion against religion; for all that 2020 has done, it creates fertile ground for inspiration for thrash bands.

Replacing a key member once is hard enough but replacing them twice after the much heralded comeback is a much more daunting task for the band, let alone the eventual replacement, who for Onslaught is Dave Garnett, who fans of UK thrash will know from his work in Bull Riff Stampede. Oddly enough, it follows what now appears to be a trend of thrash bands of old taking members from said band as replacements for departing members, with Jay Walsh having replaced Chris Astley in Xentrix several years earlier. Garnett certainly has the experience and CV to be afforded the opportunity to replace Keeler and he does so admirably on Generation Antichrist. Indeed, Garnett's call back to his work in Bull Riff Stampede in "Strike Fast, Strike Hard" with the line "Born to kill it's killing time" is a nice touch and nod to his roots.

The flipside to the aforementioned fertile ground for inspiration is one that has befallen many bands in recent years, that is, they often have too much to say and as a result none of it sticks, flitting between ideas too quickly to really land a concise blow that will stick in the listener's mind. Much like an Ultimate Warrior interview, you can get an overall idea of the conviction in delivery but God help you if you can remember much detail of what was said. Generation Antichrist falls much into the same pattern with little but the chorus and instrumental parts being memorable on much of the album's contents; this is amplified by Garnett's lack of variation in his vocal patterns, leaving many of the verses to blur into one.

It does come at a cost though, with his voice lacking the diversity in its delivery, often sticking to the same shout style too often so as to dilute its impact and make it become monotonous towards the album's end. It is that point that the band show their confidence in their newfound front man by presenting fans with a direct comparison to Keeler with the band re-recording 2019's "A Perfect Day To Die" with Garnett on vocals; given how taken I was by the original, I was intrigued at how Garnett would measure up. While Garnett does ultimately come off as the weaker of the two, it isn't by as far as initial thoughts would have you believe, giving hope to fans of the band that with some more time with Garnett, future material that better suits his voice will be good.

While much attention is put on Garnett, there is much more to the band than just him, Rockett takes his place once again at the helm with his six string slung over his shoulders, leading the new look band through its paces as he reels off riff after riff that fans of the band have long become accustomed to. With Wayne Dorman his latest partner in crime, the two fashion a guitar assault that blitzes the senses with overwhelming ferocity and power on tracks like "Bow Down To The Clowns" and "Addicted To The Smell Of Death", while balancing this with a sense of groove on tracks like "Empires Fall" that makes the track the compelling listen that it is.

"All Seeing Eye" does show the band can strike a happy medium between the two, mixing power with a slower tempo that will rattle in the space your brain once occupied. With that said, however, the machine gun delivery on "Religiousuicide" will see you pinned against the wall as it blasts out of the speakers with a venom that will remind you that sometimes doubling down can sometimes work just as well as doing things differently.

The production of the album is a mixed bag; being the most polished and rounded album in the band's catalogue to date, it does enable a clear and crisp experience that allows listeners to focus on their chosen instrument should they want to. It does however come at a cost of losing the lo-fi charm of the band's earlier work on albums such as The Force; while it would be foolish to expect the band to try and reproduce that sound, it doesn't mean you can't help but miss it at the same time.

Generation Antichrist is a strong release and one that shows there is more mileage in the tank than many would assume of a band nearing their 40th year; it is one that has its flaws but offers glimpses of how the band can rectify them in future. Onslaught have defied the odds and produced an album that exceeds expectations.

Written on 27.09.2020 by
omne metallum
Just because I don't care doesn't mean I'm not listening.
More reviews by omne metallum ››