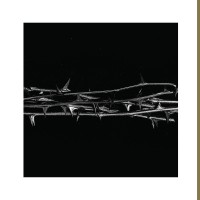 
At long last, Amenra have treated us to Mass VIIģ I mean De Doorn.

I imagine that, to a fair number of people, Amenra are first and foremost a live band; it's difficult to overstate the sheer overwhelming nature of their stage shows in a suitable venue, the anguished screams of frontman Colin H. Van Eeckhout backed up by waves of crushing post-metal sound. However, whilst the single-minded nature of Amenra's sound perhaps lends itself slightly better to a live setting, their studio output should by no means be overlooked, with each of the recent Mass albums delivering potently atmospheric post-metal, culminating in the stellar "A Solitary Reign" on their most recent record, Mass VI. De Doorn (which translates to The Thorn) signals a departure from the naming convention the band had previously committed to, and that change is reflected in novelties in the album's music, with the record representing an advancement of the band's work to date.

One of those novelties one might notice just from reading the track list is the language of choice; De Doorn is Amenra's first Flemish-only album, highlighting the connection between the band and their homeland and home towns. On the vocal front, in addition to a new language, there's also a new presence to be found on opening track "Ogentroost", with Oathbreaker's Caro Tanghe featuring on both this track and "De Dood In Bloei", the latter a spoken word performance.

"Ogentroost" is a really interesting opening track, exhibiting quite a few features that differentiate it from the band's past work. Amenra are renowned for the extent to which their music focuses on alternating between hushed quiet, slowly building sections with explosive metal outbursts, so quieter stretches are by no means a novelty, but the dark ambient introduction to this track runs closer to Van Eeckhout's solo work under the CHVE moniker, and it sets a strong foundation upon which the band gradually advance towards a slow doom metal trudge; there's a hint of Wolvennest to the first metallic section of this song, with Van Eeckhout's signature pained screams contrasted with Tanghe's hushed background vocals. When the song transitions into an ominous tom-heavy percussive march, it picks up the pace, with the central riff of the final segment on this song pushing along with a level of momentum not commonly found in the band's work. There's a lot to digest in "Ogentroost", but it makes it clear early on that Amenra have no intention of just retreading old ground on the album.

Following the dark ambience and spoken word of "De Dood In Bloei", "De Evenmens" runs close to what one would expect from an Amenra song, although in addition to contributing some spoken word himself, the clean vocals from Van Eeckhout during the latter stretches of this song have a distinct feel compared to earlier albums, where they were predominantly reserved for the song periods of songs ("A Solitary Reign" not withstanding); the echoing, haunting vocal melodies work wonderfully well in combination with the muscular riffs. Whilst on the topic of softer sections, one aspect of Amenra's albums that I've previously found to be less reliably excellent are the really quiet moments; ignoring the tendency of the likes of Isis and Cult Of Luna to immerse lush melody into their more vulnerable moments, Amenra often opt for stripped-down segments, not all of which manage to be as compelling and powerful as they seem intended to be. On De Doorn, I find this to be less of an issue; between the dark ambience on "Ogentroost", the neofolk vibe of "Het Gloren"'s soft break and the subtle melancholy of "Voor Immer", I remain engaged throughout De Doorn.

The last two songs on the album also deserve some discussion; there have been occasional descriptions of Amenra as a black(ened) metal band, and whilst for the most part I don't really agree with that, there's a clear blackened tinge to the chords in "Het Gloren" that imbue the song with a real sense of menace, menace that is actualized after the aforementioned folky mid-section with a quite immense climax. "Voor Immer" deviates from the soft/loud template to instead go for a soft-to-loud approach, not unlike "Ogentroost"; however, instead of lengthy periods of dark synth work, this song is sustained by soft, understated guitar that ever so gradually builds for the first two-thirds of the song before Amenra bring the fire to round things off. The fact that the song remains appealing for those first 8 minutes is testament to how well the clean guitar work is developed during this period, with some enchanting moments woven in beneath Van Eeckhout's spoken word.

It's a bit of a cliché to refer to a new album from a long-established band as a maturation of their sound, but it feels fitting when describing De Doorn. Whilst retaining all the elements they already possessed in their sound that enabled their reputation to grow, Amenra have managed to experiment with new ideas and incorporate them in a manner that elevates the record. As with all Amenra albums that I've previously heard, there's moments where it flirts with being too subdued, but when they're at their best, there's very few bands that can match the band's intense atmosphere, and De Doorn is Amenra at their best, or at least very close to it.

Written on 25.06.2021 by
musclassia
Hey chief let's talk why not
More reviews by musclassia ››