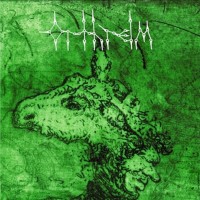 
Orthrelm are a weird band. Anyone remotely familiar with them will agree on that.

In fact, they are so weird that they cannot really fit into any musical category. Are they metal? Rock? Avant-garde? Experimental? No one can really answer this question, but it's not important. What's important about Orthrelm is that most people think they suck ass.

Tell anyone to listen to this album, and the responses you'll get will most likely be things along the lines of "What the fuck was that?" or "Please, never again!" I even found a video on YouTube calling it one of the worst albums ever made. The point I'm trying to make is that this release is so weird and unconventional that to most people it just sounds awful, which is justified. This is more than 40 minutes of repetitive, insane riffs drilling into your ears over and over and over again. Musically speaking, you will most likely not get any pleasure or enjoyment out of this. There are no melodies, no harmonies, nothing your brain can attach to, just pure dissonance. The fact that there's only a guitar and a drum set only amplifies that; you don't have the layers of harmonies that a bass or another guitar help to bring, it's just a purely raw and chaotic mess.

And yet, even with all of this, I like this album. It takes an unconventional edge on music as a whole, which is rather interesting, but that's not what makes it an enjoyable album. The first 10 minutes are a chore to get through the first time, and then the remaining 30 minutes just swoop by without a warning. It's frankly quite a hypnotic experience, the album sucks you in, and before you know, you've listened to it 3 times in a row. This weird hypnotic feeling is why I like this release so much and somehow keep coming back to it. That feeling is achieved thanks to one thing: that the album is played by human beings. It might not seem like much, but if this had been a loop made on a computer, it would not have been as interesting. Here, you're constantly on your toes, wondering where the riff is going to go, hearing the little variations that come with every repetition. Eventually, the riff stops being the same, there's some real evolution happening in there, there is nothing constant in this song, and it could go in any direction, which keeps you concentrated as to what is going to happen.

This album is truly a one of a kind, something most likely impossible to replicate. It is so unique and challenging, while somehow being addictive, and I simply love it.
Written by doez | 05.08.2021