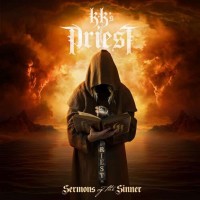 Perhaps one of the more intriguing releases of 2021 comes in the form of one of the more predictable releases of the year, namely KK's Priest's debut release, Sermons Of The Sinner, the first bit of music KK Downing has released since his departure from Judas Priest a decade prior.

Does this sound like Downing’s erstwhile band? Of course it does; when you consider how long he was in Judas Priest, you can fully understand that this sound is his natural palette and isn’t him merely aping former glories (for those who think he should have mixed things up for the sake of it, I refer you to 2wo). It does shine a spotlight on that question, which I’m sure is at the forefront of everyone’s mind: is it better than Firepower? Unfortunately for Downing, no, no it isn’t; it is far from a bad album, in fact it's enjoyable when you take it on its own merits but it is unlikely to be an album many will point to in years to come.

Sermons Of The Sinner does contain a good mix of straight-up heavy metal and power metal-lite to keep you listening from start to end, with a collection of tracks that are enjoyable, though rarely much more than that. There are songs that are more enjoyable than others, with the album closing out as it reaches it peak, with the penultimate track “Hail For The Priest” and “Return Of The Sentinel” being the pick of the bunch, while the likes of “Hellfire Thunderbolt” and “Metal Through And Through” encapsulate the good-but-not-great sound this album seems stuck in.

Surrounding himself with a solid group of journeymen in rounding out the band, KK's Priest isn’t lacking in talent or experience when you see who is in the band. While the band play things safe creatively, they do it in style and don’t phone it in performance-wise, working well in the space they allot themselves. However, when you mix this with a production that is anaemic and lacks the power to let the music really hit home, you can’t help but shake the feeling that this is little more than a laugh in the studio for those involved, which isn’t a bad thing if you’re in the band but not great as a listener.

The thing with Sermons Of The Sinner is that if you were to strip the name value from the line-up then you end up with an album that is enjoyable but one that wouldn’t get as many repeated listens or as big an audience as it does on its own merit. Tracks like “Brothers Of The Road” and “Wild And Free” aren’t bad, but they’re ironically very middle of the road, neither great nor bad, and it is rare that the album shifts in either direction.

If you’re looking for a fun forty minutes of distilled metal, then Sermons Of The Sinner will provide for you, with some decent riffs and choruses among its runtime that will have you nodding your head. If you’re looking for something that will grab your attention and give you an experience you won’t soon forget, then perhaps give this one a miss; while the band isn’t letting you down, it just isn’t something they appear to be offering.

Written on 05.10.2021 by
omne metallum
Just because I don't care doesn't mean I'm not listening.
More reviews by omne metallum ››