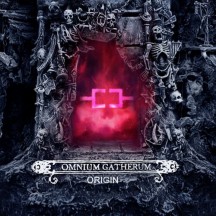 
After going Beyond, Omnium Gatherum seek out the Origin of their success.

With this year commemorating the 25th anniversary since their formation, Omnium Gatherum are now genuine veterans of the melodeath scene. It doesn’t always feel like that to me, having only heard their albums since the relative breakthrough that was New World Shadows and always having them inextricably linked with their similarly named Finnish brethren Insomnium (who, of course, have featured Omnium Gatherum founder Markus Vanhala for a decade now). Still, whilst there is a clear personnel and sonic overlap between these two bands, the more uplifting and at times ethereal nature of Omnium Gatherum’s music helps set them apart from Insomnium, and that nature has arguably not been exhibited more successfully than on 2013’s Beyond. I’ve been waiting for them to recapture the magic of Beyond since its release, with Grey Heavens and The Burning Cold not quite hitting that sweet spot for me; thankfully, here comes Origin to get me right on board the OG hype train.

One of the things that I liked so much about Beyond and New World Shadows was their inclusion of longer, more spacious songs such as “White Palace” and “Deep Cold”; however, prior to the release of their two subsequent records, both Vanhala and frontman Jukka Pelkonen told Metal Storm interviewers about how much they appreciated taking a more ‘in-your-face’ on each of those albums. Now, I can respect that, and those records did result in some quality offerings (I’m fond of “The Pit” and “Be The Sky” in particular), but when I heard those “White Palace” tones on “Fortitude” during my first playthrough of Origin, I couldn’t help but be excited at their return, and what a successful return it is, with those cleaner guitars creating soothing atmospheres and delivering lush solos whilst Pelkonen’s growls exchange with distant clean vocals.

Now, there is still some ‘in your face’ music on Origin, although in general this feels like one of the least ‘aggressive’ Omnium Gatherum albums yet, so if that’s what you’re hoping for, you may be disappointed. “Prime”, whilst not really being full-pelt at any point, is still a track with drive and energy, along with several strong hooks spread across the synths, guitar leads and riffs. “Friction” also opens with a real sense of purpose and a relatively ominous tone, although the gentle nature of the chorus does take some of the edge of that darker intent, and “Tempest” even finds time for a few rounds of blast beats. Overall, however, this is a more restrained record, and one that places more emphasis on melody and atmosphere than speed.

Thankfully, both melody and atmosphere are in abundance across the album. The 80s vibes to the central hook of “Reckoning” goes nicely with the prominent keyboard work on this track, even when contrasted with the contorted verse riff that it trades off with. The song that goes closest to the New World Shadows/Beyond era of the band, however, is the closer “Solemn”, which clocks in at an exciting 9 minutes whilst treating listeners to great riffs, leads, clean vocals, solos and keyboard work in a pleasantly sprawling package.

There’s times when the album feels a bit ‘OG-by-numbers’, but ultimately this is pretty much what I was hoping to hear from an Omnium Gatherum album in a post-Beyond world, and as much as I enjoyed aspects of its predecessors, this record is the one that really gets me excited in the band again. Another solid effort in a very strong year for melodeath.

Written on 09.11.2021 by
musclassia
Hey chief let's talk why not
More reviews by musclassia ››